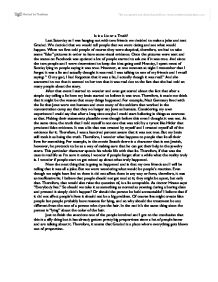 Is it a lie or the truth?

Is it a Lie or a Truth? Last Saturday as I was hanging out with two friends we decided to make a joke and test Graded. We decided that we would tell people that we were dating and see what would happen. When we first told people of course they were skeptical, therefore, we had to take some "fake" pictures in order to have some visual evidence. Once the pictures were sent and the status on Facebook was updated a lot of people started to ask me if it was true. And since the two people and I were determined to keep the idea going until Monday, I spent most of Sunday lying to people saying it was true. However, at one moment at night I remember that I forgot it was a lie and actually thought it was real. ...read more.

Considering, my own experience I could say that after a long time maybe I could start believing in things as extreme as that. Making their statements plausible even though before this even I thought it was not. At the same time, the truth that I told myself is not one that was told by a tyrant like Hitler that produced false evidence. It was a lie that was created by myself and I created myself all of the evidence for it. Therefore, I was a hundred percent aware that it was not true. But my brain still took it as being the truth. Therefore, I wonder what happens to people that lie all their lives for something. For example, in the movie Snatch there is a character that is not Jewish, however, he pretends to be as a way of making sure that he can get their help in the jewelry store. ...read more.

As doctor House says: "Everybody lies." So should we take it as something as normal as yawning during a boring class and pretend it simply didn't happen? Or should the person be held accountable? I believe that if it did not affect people's lives it should not be a big problem. Of course lies might create fake people but people probably have reasons for lying, and so why should the treatment be any different from the one of a person who dyes the hair. In the end it's the same thing since the person is "lying" about the color of the hair. Just to finish the anecdote one of the people involved and I got to the conclusion that this is a silly thing but it has already gotten pretty big proportions since a lot of people know and are talking about it. Therefore, it seems that Graded is a place where everything gets blown out of proportion. ...read more.