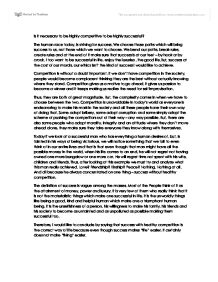 Is it necessary to be highly competitive to be highly successful? The human race today, is striving for success. We choose those paths which will bring success to us, not those which we want to choose. We bend our paths, break rules, create rules and at the end of it make sure that success is at our feet - by hook or by crook. I too want to be successful in life, enjoy the luxuries , the good life.But, success at the cost of our morals, our ethics isn't the kind of success I would like to achieve. Competition is without a doubt important. ...read more.

Some adopt bribery, some adopt corruption and some simply adopt the scheme of pushing the competitors out of their way - any way possible. But, there are also some people who adopt morality, integrity and an attitude where they don't move ahead alone, they make sure they take everyone they know along with themselves. Today if we look at a successful man who has everything a human desires of, but, is tainted in his ways of being victorious, we will notice something that we fail to even think of in our entire lives and that is that even though that man might have all the possible money in the world, when his life comes to an end, he will not regret not having owned one more bungalow or one more car. ...read more.

The definition of success is vague among the masses. Most of the People think of it as the attainment of money, power and luxury. It is very few of them who really think that it is not the materialistic things which make one successful in life, it is the unworldly things like being a good, kind and helpful human which make one a triumphant human being. It is the unselfishness of a person, his willingness to make his family, his friends and his society to become as untainted and as unpolluted as possible making them successful too. Therefore, I would like to conclude by saying that success with healthy competition is the correct way of life because even though success makes "life" easier, it certainly does not make "living" easier. ...read more.