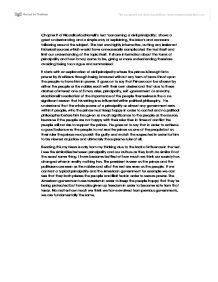 Chapter 9 of Niccollo Machiavelli's text 'concerning a civil principality,' shows a great understanding and a simple way of explaining, the idea's and concerns following around the subject. The text was highly informative, cutting any irrelevant historical sources which would have unnecessarily complicated the text itself and limit our understanding of the topic itself. It share information about the forms of principality and how it may come to be, giving us more understanding therefore avoiding being too vague and summarised. It starts with an explanation of civil principality where the prince is brought into power by its citizens through being favoured without any form of force thrust upon the people to have him in power. ...read more.

He understand that the whole power of a principality or almost any government rests within it people, who the prince must keep happy in order to control and no political philosopher before him has given so much significance to the people as the source, because if the people are not happy with their ruler then in times of conflict the people will not rise to support the prince. He goes on to say that in order to achieve a good balance so the people to not see the prince as one of the people but as their ruler the prince must punish the guilty and watch the suspected in order for him to be viewed as justice and ultimately the supreme ruler of all. ...read more.

I have become baffled at how much we think our society has changed when in reality nothing has. The president is seen as the prince and the politicians are seen as the nobles and all of the rest are seen as the people. If we contrast a typical principality and the American government for example we can see that they both please the people and illicit fear in order to secure power. The American government uses terrorism in order to keep the people happy that they're being protected but have also given up freedom in order to become safe from that terror. No matter how much we think we have evolved from previous governments, we are fundamentally the same. ...read more.