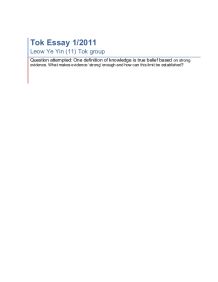 One definition of knowledge is true belief based on strong evidence. What makes evidence strong enough and how can this limit be established?

One definition of knowledge is true belief based on strong evidence. What makes evidence 'strong' enough and how can this limit be established? There are many types of evidence such as empirical evidence, logic and the use of authority but they can only be strong enough if the propositional knowledge it supports cannot be disproved. Strong evidence has to be sustainable, valid, accurate, reliable, consistent and satisfactory through experience. The limit is naturally established at the point in time when a group of experts agree upon that propositional knowledge in its own specific field. In this essay, I will be looking at three Areas of Knowledge: Mathematics, Natural Sciences and History, which use logic, empirical justification-the perceptual or sensory experience-and Authority to succor a propositional knowledge. When an authority, or a community of experts shares knowledge, we have to accept them as how strong they can be. Logic in mathematics is sustainable, valid, accurate, reliable, consistent and satisfactory. In other words, it is concrete and the strongest. One can't change the fact that in an equilateral triangle all sides are equal or the formation of equilateral triangles could form a circular shape: It is absurd if this knowledge could be changed. When we compare two number sequences "1,3,5,7,9" and "2,4,6,8" we see a consistent pattern. ...read more.

It is now a fact that the Earth is round, evaporation occurs upon heating, the air is made of particles and atoms and the law of gravity applies to everything on Earth. These evidence are strong because they are valid, consistent, reliable and accurate. This knowledge are also accepted by scientists all over the world, and could not be proved to be otherwise and we uses these concepts by testing it again and again. Malcolm Gladwell, a renowned sociologist, states that with only 10 000 hours of practice can one be successful in their own fields from his study of humans and through his observations. For example, he found that Asians excel better at mathematics because of their culture, tradition and beliefs, where it is an essential part of academic study for a brighter future and for the pride of their parents. Long time athletes and musicians who are self-motivated and hardworking achieve rewarding results in their work. By training relentlessly, at the right timing and luck, we could be successful in what we do. Thus, the evidence for successful people: "10 000 hours of practice" is consistent, valid, accurate, reliable, consistent and satisfactory. Sociologists have mainly agreed on this propositional knowledge, calling him a "genius" and Gladwell is named by Time magazine to be the top ten influential people. ...read more.

Hence, from looking at three different Areas of knowledge, I conclude that in order for it to be considered strong, evidence have to be sustainable, valid, accurate, reliable, consistent and satisfactory. On a sidenote, the Mathematician Raymond Wilder stated: "we do not possess, and probably will never posses, any standard of proof that is independent of time, the thing to be proved, or the person or school of thought using it." Consistency is time; and only time can prove propositional knowledge. However, time is infinity, so we can never know when our knowledge is the Truth! Also, the strong evidence for whatever knowledge we have only gives us a side of reality; the supreme reality is something we may never know. There's also the Gettier-proof justification, where it resists the truth by basing belief on luck rather than what that actually justifies the propositional knowledge. One may get a justified true belief but believed on different grounds that support the knowledge. However, for now, we can settle on evidence that are strong for the knowledge we currently have; by having sufficient, valid, accurate, reliable, consistent and satisfactory evidence, we could trust. We also have to trust and rely on the authority, the agreement of the various communites of experts in all Areas of Knowledge, to know certain truths because we could not know everything. We may not live to know the Truth, but our approximated truths may let us live. ...read more.