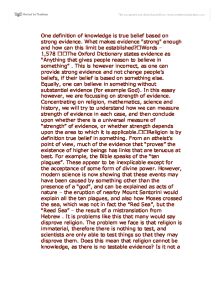 One definition of knowledge is true belief based on strong evidence. What makes evidence &quot;strong&quot; enough and how can this limit be established?&amp;#8232;

One definition of knowledge is true belief based on strong evidence. What makes evidence "strong" enough and how can this limit be established??Words - 1,578 ??The Oxford Dictionary states evidence as "Anything that gives people reason to believe in something" . This is however incorrect, as one can provide strong evidence and not change people's beliefs, if their belief is based on something else. Equally, one can believe in something without substantial evidence (for example God). In this essay however, we are focussing on strength of evidence. Concentrating on religion, mathematics, science and history, we will try to understand how we can measure strength of evidence in each case, and then conclude upon whether there is a universal measure of "strength" of evidence, or whether strength depends upon the area to which it is applicable.??Religion is by definition true belief in something. From an atheist's point of view, much of the evidence that "proves" the existence of higher beings has links that are tenuous at best. For example, the Bible speaks of the "ten plagues". These appear to be inexplicable except for the acceptance of some form of divine power. However, modern science is now showing that these events may have been caused by something other than the presence of a "god", and can be explained ...read more.

It is therefore unlike mathematics in that proven theories can later be disproved. It is also important to note that theories may be used which are known to be incorrect, but work for many examples. This is due to a lack of a better theory to explain behaviour. For example, the model of the atom with its orbiting electron's cannot work, as a moving charge would produce a magnetic field, taking away the electrons energy and eventually stopping it. This does not happen, however we stick to this model as evidence shows it works with most cases. Of course it is realistic to believe eventually someone will create a theory that better models observed behaviour, and finally disprove the current one. This is the process of induction - the creation of theories, their testing, and eventually their falsification. Strong evidence in physics is therefore evidence that shows a pattern across a wide range of examples. Strength is therefore defined by regularity of the evidence - the more consistent results are, the stronger the evidence for the pattern. The amount of evidence is also important - the more evidence you provide, the wider the range of the theory, although this does also include the recording of conditions, such as room temperature, humidity, pressure etc. ...read more.

Historians therefore became biased as they only had half the evidence to work from. Therefore evidence in history is strongest if there is a lot of it, it all corroborates, and it comes from more than one source.??In conclusion, there is only one universal measure of evidence - that is that evidence is strongest if it makes everyone confirm or change their beliefs. Beyond that, rating strength of evidence is applicable only to individual areas of knowledge. The only consistent measure seems to be amount - in every case looked at here, we have seen that the more evidence provided, the stronger the evidence is. In religion many would say the evidence is through the existence of believers, and the accepted religions are often the ones with the most members - Christianity is more credible than Jedi-ism for example. Though in maths we have seen that we can prove completely a theory, when we have no proof, evidence is a good indicator that a theory exists. In science there is no way of proving anything, therefore our only indicator comes through large amounts of evidence. History is similar, where we can never prove something happened unless we witnessed it ourselves; however large amounts of evidence are a good indicator of the existence of an event. ? ...read more.