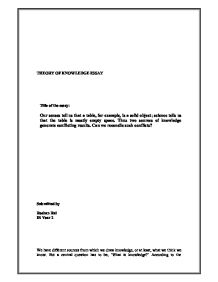 Our senses tell us that a table, for example, is a solid object; science tells us that the table is mostly empty space. Thus two sources of knowledge generate conflicting results. Can we reconcile such conflicts?

THEORY OF KNOWLEDGE ESSAY Title of the essay: Our senses tell us that a table, for example, is a solid object; science tells us that the table is mostly empty space. Thus two sources of knowledge generate conflicting results. Can we reconcile such conflicts? Submitted by Roshan Rai IB Year 2 We have different sources from which we draw knowledge, or at least, what we think we know. But a central question has to be, 'What is knowledge?' According to the Cambridge dictionary, 'knowledge is understanding of or information about a subject which has been obtained by experience or study, and which is either in a person's mind or possessed by people generally'. There are various sources through which we obtain knowledge. While some sources of knowledge are more reliable than the others, it is difficult to say if the concept of an absolute truth could ever be established. How much we rely on those sources depend primarily on how true and valid we think they are. Like many things, truth is relative. Hence, anything, which is true at a given point of time, at a given place, may be surprisingly different in another context. Every piece of knowledge is hence relative, and this relativity in context and approach manifests in what we see as different areas of knowledge. ...read more.

Some of us can certainly see further and hear more clearly than others, but none of us can see as clearly at night as an owl or hear as keenly as an elephant. Had we relied only on perception, we would never believe that concepts like ultrasound could exist. Our senses are incapable of detecting them. We can reconcile the gap between scientific techniques and natural human perception by accepting the limitations of our senses. Language is also a major component that anchors the conflicts in perception. In simpler terms, the labels used for ideas and objects (our language) immensely influence our thinking. Furthermore, changes in the meaning of words can be traced historically and as we often depend on language to provide us with knowledge, the time period that this language dates from is also an important parameter to consider. In time the meaning of the words change for many reasons and we can only be sure of the meaning of a word when we are provided with its historical context as well as its context within a sentence. Several hundred years ago, the word 'lust' meant innocent delight, while now it means something completely different. The entry for 'gay' in the New Oxford English Dictionary has thirteen definitions, the first dating as far back as Middle English. ...read more.

Contrarily, we see objects like cotton as not solid because we think it won't hurt us. In sciences, empirical evidence and experiment (or sometimes hypothesis) is the basis of knowing, while in general life, authority, memory, experience and intuition are important means of knowing. This difference in basis or context or purpose seems to generate conflicts. Nevertheless, there is basically no conflict if we see from a general perspective and recognise the reasons behind the conflict. To conclude it's like the story of nine people where each of them is asked to blind folded touch various body parts of an elephant and guess what the animal was. On being asked about which animal it was all of them answered differently. Though they touched the same elephant, just because they touched different parts of the elephant's body, they gave different answers. The same happens when the means by which we 'know' and the context in which we 'know' are different. Knowing that the purpose, motive and way we approach different areas of knowledge can differ, and accommodating the idea that language can cause conflicts in messages or knowledge, can help reconcile such conflicts. "It seems that the human mind has first to construct forms, independently, before it can find them in things. Knowledge cannot spring form experience alone, but only from the comparisons of the inventions of the intellect with the observed fact". ...read more.