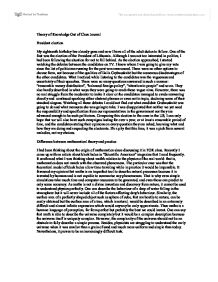 Out of Class Journal, 4 entries

Theory of Knowledge Out of Class Journal President election My eighteenth birthday has already gone and now I have all of the adult duties to follow. One of the first was the election of the President of Lithuania. Although I was not too interested in politics, I had been following the situation for not to fall behind. As the election approached, I started watching the debates between the candidates on TV. I knew whom I was going to give my vote since the list of politicians running for the post was announced. There were no other options to choose from, not because of the qualities of Dalia Grybauskaite but the numerous disadvantages of the other candidates. What I noticed while listening to the candidates was the vagueness and uncertainty of their speeches. There were so many questions answered in such a manner: "reasonable money distribution", "balanced foreign policy", "attention to people" and so on. They also hardly described in what ways they were going to reach those vague aims. However, there was no real struggle from the moderator to make it clear or the candidates managed to evade answering directly and continued speaking either abstract phrases or even not to topic, declaring some of their standard slogans. Watching all those debates I could not find out what candidate Grubauskaite was going to do and what measures she was going to take. ...read more.

Thus maths is a humane language of perception, far from perfect but probably the best we could invent. One can say that math is able to describe the universe completely but it would be a complex description because the universe itself is uniquely complex. However, the complexity of the universe should not be an obstacle to fully describe a simple process. Besides, physicists are struggling to understand the early universe when it was smaller than a grain of sand and much more uniform and simple than today. Nevertheless, it proves to be an increasingly difficult task. Secret agents Another article that made me think. It was written by Michael Shermer, whose works are always interesting and unexpected. This time it was about "secret agents" and people's belief in them. These are various theories and tales about souls, UFOs, ghosts, government conspirators and so on. The author considered why do people believe in such things or say to have seen them and provided a very strong and beautiful (at least, to me) explanation. According to him, there are two types of errors in our thinking: the first, that an observed pattern is false when it is real, and the second, that the pattern is real when it is false. For example, you stand more chance in surviving when you assume that a moving grass is a predator lurking there when it is the wind (and making the second error) ...read more.

However miraculous and intense humanity's leap during the last centuries is, I do not believe we will ever wake up being conquered by robotic, a kind of "Matrix". There is something fundamental in the structure of our brain, maybe a secret we will never understand, that distinguishes us from electronics. It could well be our ability to make mistakes that gives us such superiority, as paradoxical as it may sound. These mistakes enrich us with all-around experience as well as ability to learn pushing us to mental and social advance. Our learning may give us advice both how to develop technology and how to refrain. We are still similar to animals by our fully-throttled dive into a new stream at first and later learning the down sides of our decisions. As keen to put our effort to science before, we are now taking more careful steps, not restricted by fierce shouts that "science would kill us" but by growing awareness of unconsidered risks, such as global warming. It is amazing if we can use the technology to our good, not use our good to create technology. The ability to pause and think about what you are doing, to behave unexpectedly, to make nonsense and laugh of it is something a computer would not understand or try to do. Thus I have no doubt we will not be able to create such a thing, or at least consciously prevent ourselves from doing it. ...read more.