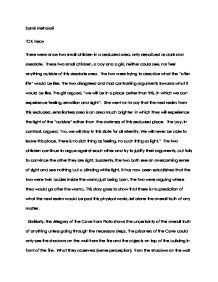 Parable of the Cave Essay

Samir Meharali TOK Essay There were once two small children in a secluded area, only described as dark and desolate. These two small children, a boy and a girl, neither could see, nor feel anything outside of this desolate area. The two were trying to describe what the "after life" would be like. The two disagreed and had contrasting arguments towards what it would be like. The girl argued, "we will be in a place better than this, in which we can experience feeling, emotiion and sight". She went on to say that the next realm from this secluded, emotionless area is an area much brighter in which they will experience the light of the "outside" rather than the darkness of this secluded place. The boy, in contrast, argued, "no, we will stay in this state for all eternity. ...read more.

The two were arguing where they would go after the womb. This story goes to show that there is no prediction of what the next realm would be past this physical world, let alone the overall truth of any matter. Similiarly, the Allegory of the Cave from Plato shows the uncertainty of the overall truth of anything unless going through the necessary steps. The prisoners of the Cave could only see the shadows on the wall from the fire and the objects on top of the building in front of the fire. What they observed (sense perception) from the shadows on the wall based their opinions of light and their perception (beliefs) of the truth of the matter. But once they reached to the outside of the cave and saw a new light, they saw the overall truth of shadows and perceptions of light (understanding and reasoning). ...read more.

I had heard this story while in a religious education class, in which the curriculum was to teach the students the divinity of the afterlife and how it is something beyond our understanding. Yet when hearing the talks between Socrates and Glaucon in the Allegory of the Cave, I could not help but see a similiarity between the two stories. Although the morals of the first story was that the afterlife is extremely divine, another understanding of this story showed that human's understanding of anything in particular is always opinionated and divided based on one's beliefs, morals and ways of thinking and that everyone will see the overall truth of any matter after going through the steps of understanding, explained in the Allegory of the Cave. ...read more.