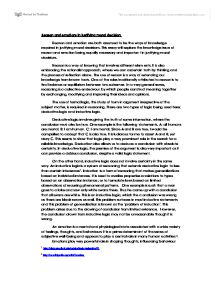 Reason and emotions in justifying moral decision Reason and emotion are both assumed to be the ways of knowledge required in justifying moral decisions. This essay will explore the knowledge issue of reason and emotion being equally necessary and important in justifying moral decisions. Reason is a way of knowing that involves different elements. It is also embracing the rationalist approach, where we can ascertain truth by thinking and the process of reflection alone. The use of reason is a way of extending our knowledge from known facts. One of the roles traditionally attributed to reason is to find balance or equilibrium between two extremes. In a very general sense, reasoning is a collective endeavour by which people construct meaning together by exchanging, modifying and improving their ideas and opinions. The use of formal logic, the study of form in argument irrespective of the subject matter, is required in reasoning. There are two types of logic being used here: deductive logic and inductive logic. Deductive logic involves giving the truth of some information, where the conclusion must also be true. One example is the following statements, A: all humans are mortal. ...read more.

The major emphasis here is how we know or justify what you ought to do. To do so, we can use reason or emotion as a way of knowledge to justify our actions. When using reason to justify a moral judgement, there may be separate reasons for people to have an argument. If it is based in fact, the argument is open to settlement by evidence, though the evidence may be very difficult to obtain and interpret. However, if it is based in principle, it is very hard to use evidence to solve the dispute as everyone's principle differs from each other. Making such a distinction is important as arguments of principle and arguments of evidence are solved differently. Thus, morality may come down to just a personal opinion. In this case, the prospects of finding the' correct' form of morality are and trying to persuade someone that one course of action is 'morally better' than the other, is like trying to convince them that apple taste better than oranges. After making a vital distinction between principle and evidence, the choice of premises when justifying a moral judgement is also equally important. ...read more.

She reasons that if she tells the teacher, she will be living up to her morals, but her if she does, she will fail the test and she will be upset. In this case, reason and emotions are both factors that will contribute to her moral judgement. In the end, the student decides to tell the teacher of her error as she felt that it was logical and 'morally right' to do so. Although she failed the test, she had a net gain of happiness as the teacher had praised her for being an honest student. Reason and emotion are both equally necessary in justifying a moral decision. Utilitarian, duty-based and virtue-based theories of ethics all rely on both reasons and emotions to differing degrees. Each system has its own flaws and despite the reams of profound books we can turn to, we will still be doubtful if any of these systems will pose severe difficulties and if a compelling theory would arise. However, theories are only 'guidebooks' and do not make a moral decision as this is what humans do. As it is hard for a human not to have any emotions, justifying a moral decision would require both the use of reasoning and our emotions play a role in decided what we 'feel' like doing. 1573 words ?? ?? ?? ?? 3 http://www.scu.edu/ethics/practicing/decision/framework.html 1 http://plato.stanford.edu/entries/logic-inductive/#1 2 http://en.wikipedia.org/wiki/Emotion ...read more.