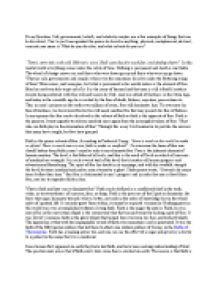 Salt, governments, beliefs, and celebrity couples are a few examples of things that can be dissolved. Youve just been granted the power to dissolve anything. What do you dissolve, and what solvent do you use?

﻿Essay Question: Salt, governments, beliefs, and celebrity couples are a few examples of things that can be dissolved. You?ve just been granted the power to dissolve anything: physical, metaphorical, abstract, concrete you name it. What do you dissolve, and what solvent do you use? ?Time's stern tide, with cold Oblivion's wave, Shall soon dissolve each fair, each fading charm?. In this mortal world everything comes under the sickle of time. Nothing is permanent and death is inevitable. The wheel of change moves on, and those who were down go up and those who were up go down. What are salt, governments and couples when even the mountains dissolve under the fluttering wings of time? Man comes, and man goes, but what is permanent in his mortal nature is the element of fear. Man has not been able to get rid of it. It is the irony of human kind that man is still a fearful creature despite being endowed with free will and reason by God. man was afraid of darkness in the Stone Age, and today in the scientific age he is rocked by the fear of death, failures, rejection, persecution etc.. ...read more.

It can only grow from within, it cannot be acquired vicariously. Nothing great in this world was ever accomplished without a living faith. Faith is the magic the power. Faith, be it in oneself or in the conviction of god is the cornerstone that that can pulverize the lurking spirit of fear. It was David?s immense faith in the glory of god that helped him overcome his fear, and defeat Goliath. The legend has it that with the impregnable sword of faith even mountains can be penetrated. It was the faith of the 300 Spartan soldiers that led them to attack one million soldiers of Xerxes in the Battle of Thermopylae. Faith has a healing power too, and one can see the effect of a sugar pill given by a doctor to a patient in the name that it is a medicine! Since human first appeared on earth they have had faith, and have been seeking understanding of God. The question now arises that if faith exists how come fear is existent on earth. The reason is that faith is not justifiable by reason or emotion. ...read more.

The fear of death is multifarious. It brings other fears in its train such as fear of painful death, fear of separation from loved ones, fear of the life after death, fear of purgatory etc. but this horrible fear of death can be dispelled if one has faith that death is not the end but the beginning of our life in heaven. Death is the doorway between planes of reality. Do not our best men die sooner? Death gives rest to our bones and delivers the soul as it is our friend and benefactor. Thus the spirit of faith can render all fears incapacitated. To conclude I will say that faith is the universal solvent in which not only fear but all the miseries and perplexities of this incomprehensible world can be dissolved. I fully subscribe to Harry Emerson?s views when he said,? Fear imprisons, faith liberates; fear paralyzes, faith empowers; fear disheartens, faith encourages; fear sickens, faith heals; fear makes useless, faith makes serviceable?. If this odious element of fear is removed from humanity, it is all the more probable that we will once again witness the golden age of man because nothing can paralyze the mind more than fear and nothing hat can liberate the mind more than faith. ...read more.