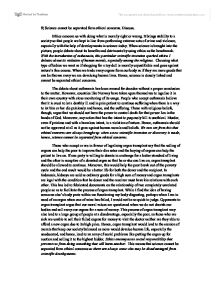 Science cannot be separated from ethical concerns. Discuss. Choosing what type of babies we want as if shopping for a toy doll is morally unjustifiable and goes against natures free course. When we trade away organs from our body as if they are mere

9) Science cannot be separated from ethical concerns. Discuss. Ethics concern us with doing what is morally right or wrong. It brings stability to a society so that people are kept in line from performing extreme acts of crime and violence, especially with the help of developments in science today. When science is brought into the picture, people debate about its benefits and detriments by using ethics as the benchmark. With the introduction of euthanasia, this particular scientific invention sparked ethical debates about its violation of human morals, especially among the religious. Choosing what type of babies we want as if shopping for a toy doll is morally unjustifiable and goes against nature's free course. When we trade away organs from our body as if they are mere goods that can be thrown away we are devaluing human lives. Hence, science is closely linked and cannot be separated ethical concerns. The debate about euthanasia has been around for decades without a proper conclusion to the matter. However, countries like Norway have taken upon themselves to legalise it in their own country with close monitoring of its usage. ...read more.

This has led to fabricated documents on the relationship of two completely unrelated people so as to facilitate the process of organ transplant. While I find the idea of having someone else's body parts within me functioning my body disgusting, perhaps when I am in need of an organ when one of mine has failed, I would not be so quick to judge. Opponents to organ transplant argue that our moral values are questioned when we do not cherish our bodies and sell away our organs for a sum of money. This process of organ transplant may also lead to a large group of people at a disadvantage, especially the poor, as those who are sick are unable to sell their failed organs for money to visit the doctor neither are they able to afford a new organ due to its high price. Hence, organ transplant would lead to the erosion of morals that keep our society balanced as more would devalue human life, especially the uneducated, and hence, lead to an array of social problems like putting the organ up for auction and selling it to the highest bidder. ...read more.

If we can disprove Hitler's actions as immoral, then designer babies are equally unethical as well. Hence, we can see yet again that science cannot be separated from ethical concerns. Ethics maintains the order in a society and keeps the social stability. With new scientific inventions and discoveries, ethical concerns are raised to prevent society from exploiting science at the expense of those who are unable to benefit from it. Euthanasia, for one, goes against the religious beliefs of those whose religion disagree with taking the life of another human being under any circumstances as they believe it is morally wrong to commit such an act, hence, ethical concerns are raised by these people regarding the usage of euthanasia brought about by science. Organ transplant places the poor at a disadvantage, going against the social responsibility of a society to take care of the disadvantaged, and hence, ethical concerns are brought up to question the morality of this science. Lastly, a designer baby is another scientific discovery that goes against our moral values as it promotes rejection of those deemed imperfect. Hence, science cannot be separated from ethical concerns. ?? ?? ?? ?? ...read more.