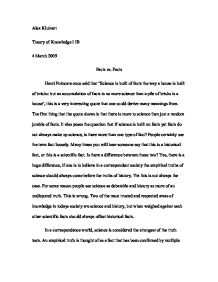 Alex Kluivert Theory of Knowledge I IB 4 March 2009 Facts vs. Facts Henri Poincare once said that "Science is built of facts the way a house is built of bricks: but an accumulation of facts is no more science than a pile of bricks is a house", this is a very interesting quote that one could derive many meanings from. The first thing that the quote shows is that there is more to science then just a random jumble of facts. It also poses the question that if science is built on facts yet facts do not always make up science, is there more than one type of fact? People certainly use the term fact loosely. Many times you will hear someone say that this is a historical fact, or this is a scientific fact. Is there a difference between these two? Yes, there is a huge difference, if one is to believe in a correspondent society the empirical truths of science should always come before the truths of history. Yet this is not always the case. ...read more.

The quote says that science is more than and jumble of facts. This is true. To use the analogy given in the quote, if you want to build a house you will not only need the materials such as bricks, but you also must have plans or blueprints. In science the bricks are facts and the blueprints are the scientific method. This is a universal method that gives the steps for finding a scientific truth. It is true that facts supply the building materials for science but the scientific method supplies the plans for it to be built. History has some problems when it goes up against science in questions of facts. The first problem is histories rankings on the correspondence truth ladder. As long as we can not go back in time history can never be tested. This excludes the empirical truth test from histories arsenal. Without this test it cannot match up with science. At best I could see a logic claim for a historical fact. ...read more.

After a crime takes place forensic scientists will use historical evidence to create the probable physical features of the criminal. Then forensic specialists can use any DNA found at the crime to run tests and get more specific data on the criminal. However sometimes in these cases the scientific evidence disputes the conclusions drawn from historical facts. In these cases the forensic science is always believed over the historical conclusions. One example is in the case of the serial killer in Baton Rouge, past serial killers tended to be white men in there twenties and thirties, however when the DNA sequencing was run it turns out that they were looking for a black man. When this information arose the forensic scientists were correct and the killer was apprehended. History and science can both have facts so when head to head which fact is right? I would have to say that science is the victor. It is important to have a class system within these facts in the future when problems arise. If there was a universally believed system then there would be no disputes in the subjects of abortion, evolution, or any other of these questionable topics. ...read more.