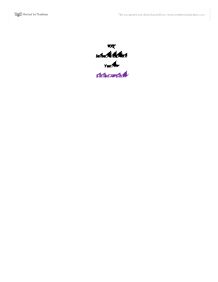 TOK Sense perception Year 11 Shahed Al-Sharifi * What is the role of culture and language in the perceptual process? Do people with different cultural or linguistic backgrounds live, in some sense, in different worlds? Two of the most important aspects of perceptual process are how the culture and language play a role on a person can completely affect their entire life, in which how they view the world. For example a person who has been brought up by the Hindi language/culture will recognize the world by their cultural point of view and have a different manner of communicating which can lead them to having their own cultural community and background, which would isolate them from all other cultures. ...read more.

This simply means to understand the language you must first learn the culture and its background. Cultures can provide you with a different teaching method to others, for example the middle-eastern people would teach their children sexual education at a marriage age, whether those of the western countries would teach their children at a young age. Cultures can also be lost considering in which country they live in, such as those who are from the middle east and living in the western countries will have to bring up their children according to the western standard, if not then the children will simply learn themselves of what they must not know or what they don't need to know before time. ...read more.

In conclusion, people with different cultures and backgrounds are able to live in different worlds, however some part of their culture maybe or may not be lost, it all determines on the surrounding environment. The environment can change a person's culture entirely, for example a Chinese man may marry an American woman who would change his whole life perspective and arrangements, his children will also be brought up differently than how he was brought up. In all that perceptual process, life is becoming much smaller and cultures are interacting with each other day by day, which may allow similar cultures to view aspects the in the same technique or method. But overall, culture and language can be used in different worlds, its how one uses these indicate whether they are able to live in countries. ?? ?? ?? ?? Shahed Al-Sharifi ...read more.