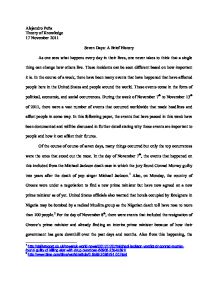 Seven Days: A Brief History. During the week of November 7th to November 13th of 2011, there were a vast number of events that occurred worldwide that made headlines and affect people in some way. In this following paper, the events that have passed in t

Alejandro Pe�a Theory of Knowledge 17 November 2011 Seven Days: A Brief History As one sees what happens every day in their lives, one never takes to think that a single thing can change how others live. These incidents can be seen different based on how important it is. In the course of a week, there have been many events that have happened that have affected people here in the United States and people around the world. These events come in the form of political, economic, and social occurrences. During the week of November 7th to November 13th of 2011, there were a vast number of events that occurred worldwide that made headlines and affect people in some way. In this following paper, the events that have passed in this week have been documented and will be discussed in further detail stating why those events are important to people and how it can affect their futures. Of the course of course of seven days, many things occurred but only the top occurrences were the ones that stood out the most. In the day of November 7th, the events that happened on this included from the Michael Jackson death case in which the jury found Conrad Murray guilty two years after the death of pop singer Michael Jackson.1 Also, on Monday, the country of Greece were under a negotiation to find a new prime minister but have now agreed on a new prime minister as of yet. ...read more.

Summit. He aims on improving the United States' relationship with countries in the Asia-Pacific region.11 Italy approved a new law stop and avoids another euro zone crisis from happening.12 Italy has been in the headlines for almost the whole entire week because of their bankruptcy. Finally, on November 13th, the Supreme Court justices have appeared to be calm to push Obama's health care plan or "Obamacare." Britain also faced a horrible week with their economy. Unemployment and growth is also plummeting drastically and is affecting the young people that are getting and trying to look for jobs. The Iranian Parliament speaker said on November 13th that lawmakers will soon talk about Iran's future cooperation with IAEA as said earlier through the week as Iran threatened countries with nuclear weapons in their possession.13 Over the course of seven days with this events happening, one can see and/or feel how important that event can be. For example, the Michael Jackson death trial can be important to people for those who like the works of Michael Jackson. Also, it may be important to American people as Michael Jackson changed the way pop culture is and it becomes part of our American culture. Also, when it comes to the threats that Iran and Nigeria have imposed that they say that have bombs and nuclear weapons, this is seen important because of what had happened in the past that include such weapons. ...read more.

One can see that history is never documented the same because it depends on who, when, and how a person/group sees the event/s. In conclusion, one can see that in history there are always going to be flaws because of who wrote and said it, from which the person/people said it and experienced it (point of view), and how it is interpreted to various countries and cultures. With its flaws also come valid reasons when it comes to history documentation as it contains multiple sources that can be put together to see how they all connect. During the week of November 7th to November 13th, there were a series of events that were documented. These events came in the form of political, economic, and social occurrences. No matter how the incident occurred, it will/does affect people not matter what the outcome turns to be. In this paper, the events were explained on how and what had happened throughout the entire week and showing how it is important to people and how it also affect people in their future. When it always comes to history, there is always going to be things that will not come out correctly whether it's by accident or on purpose. All in all, the documentation of history is flawed because of the number of actual events that were documented and the valid reasons and ideas that exist to an extent. 1 http://dailyrecord.co.uk/news/uk-world-news/2011/11/07/michael-jackson-verdict-dr-conrad-murray-found-guilty-of-killing-star-with-drug-overdose-86908-23545391/ 2 http://www.time.com/time/world/article/0,8599,2098791,00.html 3 http://www.cbsnews.com/8301-503543_162-57321503-503543/world-divided-on-response-to-iran-nuke-report/ 4 http://www.guardian.co.uk/media/2011/nov/09/news-of-the-world-prince-william 5 http://calgary.ctv.ca/servlet/an/local/CTVNews/20111109/CGY_oenn_state_stamps_111109/20111109/ 6 http://latimesblogs.latimes.com/entertainmentnewsbuzz/2011/11/james-murdoch-.html 7 http://businessweek.com/news/2011-11-10/italy-senate-speeds-vote-that-may-lead-to-monti-government.html 8 http://ca.reuters.com/article/topNews/idCAL6E7M601O20111111 9 http://boston.com/news/world/middleeast/articles/2011/11/11/syrian_forces_fire_on_protesters_killing_5/ 10 http://bbc.co.uk/news/world-asia-15688973 11 http://www.voanews.com/english/news/Obama-in-Hawaii-for-APEC-Summit-----133737158.html 12 http://www.gulf-daily-news.com/NewsDetails.aspx?storyid=317514 13 http://news.xinhuanet.com/english2010/world/2011-11/13/c_131244418.htm ?? ?? ?? ?? ...read more.