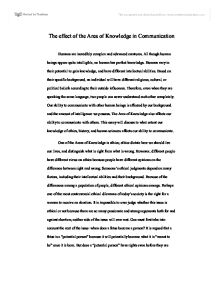 The Effect of Communication

The effect of the Area of Knowledge in Communication Humans are incredibly complex and advanced creatures. All though human beings appear quite intelligible, no human has perfect knowledge. Humans vary in their potential to gain knowledge, and have different intellectual abilities. Based on their specific background, an individual will have different religious, cultural, or political beliefs according to their outside influences. Therefore, even when they are speaking the same language, two people can never understand each other completely. Our ability to communicate with other human beings is affected by our background and the amount of intelligence we possess. The Area of Knowledge also affects our ability to communicate with others. This essay will discuss to what extent our knowledge of ethics, history, and human sciences affects our ability to communicate. One of the Areas of Knowledge is ethics; ethics dictate how we should live our lives, and distinguish what is right from what is wrong. However, different people have different views on ethics because people have different opinions on the difference between right and wrong. Someone's ethical judgments depend on many factors, including their intellectual abilities and their background. Because of the differences among a population of people, different ethical opinions emerge. Perhaps one of the most controversial ethical dilemmas of today's society is the right for a woman to receive an abortion. ...read more.

Clearly, ethics, as apart of the Area of Knowledge, greatly affects our ability to communicate. History is a major aspect of the Area of Knowledge. History is essential in understanding our past, and our future. With our knowledge of history, we can understand the world to a greater extent. However, history is interpreted differently depending on a variety of factors, including generational differences, background differences, political differences, etc. For example, someone who grew up in the south of the United States of America during the Civil War would most likely support slavery. A better example would be Nazi "brainwashing"; the minds of millions of Germans during the 1930's and early 1940's had been indoctrinated with Nazi political beliefs. Hitler influenced these people, and convinced them of all sorts of terrible things. He convinced millions that Jews were responsible for World War One and that all Jews were involved in a secret conspiracy where they plotted to destroy the German economy. Surely, there are Nazi supporters who still live today, who have always supported the Nazi party since the party first came into power. Consider members of the Hitler Youth movement, who still live today. As children, their brains were molded to believe Nazi indoctrinations, and indoctrination can last a lifetime. In history, we learn about the values of previous generations, and come to understand that these values greatly oppose to most modern values; we learn that these ideas are morally unjust. ...read more.

are often more valid than decisions and perceptions based on much more information and research. As a result, Gladwell argues that we can make better judgments by trusting our "gut feeling" because these instincts are based on an amazing amount of information that we are subconsciously aware of from our environment. This is clearly an example of how human science helps us understand how to communicate and understand each other to a greater extent. Also, this shows how unaware we are of our own minds and of our actions, which further suggests that if we have trouble understanding ourselves, it is even more difficult to understand others, and therefore difficult to communicate with others. Clearly, this shows that human science affects our ability to communicate to a great extent. In conclusion, humans will never be able to fully understand each other. Two people will never understand each other; every person is an individual, and has their own set of beliefs will differ to the beliefs of others. Also, people are still exploring themselves individually, and have a hard time fully grasping themselves, let alone others. Humans are indeed, amazing in their ability to communicate, but many factors, including the Area of Knowledge, affects this ability. Through this essay it has been proved that human communication is affected ethically, historically, and by human sciences to a great extent. ?? ?? ?? ?? ...read more.