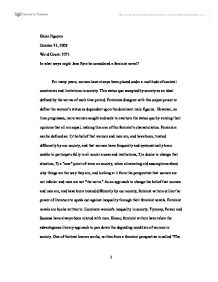 The feminism in Jane Eyre

Haian Nguyen October 31, 2009 Word Count: 3271 In what ways might Jane Eyre be considered a feminist novel? For many years, women have always been placed under a multitude of societal constraints and limitations in society. This status quo accepted by society as an ideal defined by the norms of each time period. Feminists disagree with this unjust power to define the women's status as dependent upon the dominant male figures. However, as time progresses, more women sought and seek to overturn the status quo by voicing their opinions that all are equal, making this one of the feminist's characteristics. Feminism can be defined as: 1) the belief that women and men are, and have been, treated differently by our society, and that women have frequently and systematically been unable to participate fully in all social arenas and institutions; 2) a desire to change that situation; 3) a "new" point-of-view on society, when eliminating old assumptions about why things are the way they are, and looking at it from the perspective that women are not inferior and men are not "the norm." As an approach to change the belief that women and men are, and have been treated differently by our society, feminist writers utilize the power of literature to speak out against inequality through their feminist novels. Feminist novels are books written to illuminate women's inequality in society. Tyranny, Power and Success have always been related with men. Hence, feminist writers have taken the advantageous literary approach to pen down the degrading condition of women in society. One of the best known works, written from a feminist perspective is called "The Second Sex" by Simone de Beauvoir. The intent of de Beauvoir is to define herself, but first define a woman. The title of this book seats the woman's position as "second" rather than first or equal, implying that all women are second to men. ...read more.

Soon after meeting him, Jane falls in love with Mr. Rochester, her master, despite his higher social class. Regardless of the unconventionality of the couple, Mr. Rochester reciprocates this love. It was neither her appearance that he finds attractive, nor her wealth. He is fascinated by her mind, and how interesting an individual she is, placing Jane Eyre in a separate category while implying that all ideal Victorian-era were only good for their appearance. Within this love affair the author allows her to resemble the rebellion of the masculine idealism. Jane's bravery aims to overthrow the constraints of lower status women not being able to love their master. At the time period, women are not allowed the freedom to love. They are subjected to marriage in accordance to social status. Jane Eyre is a feminist novel based on the one feminist aspects that woman should have opportunity to choose their path in life. Those who dare to object this unwritten rule of "correct behavior" are disapproved by society. For the women, they either marry to improve their social status or marry someone who is of equal status. Jane Eyre allowed her feminist belief to shine by abiding to her true feelings. Relationships in Jane Eyre exemplified the limitation of ability and opportunity of middle-class women. Early in Rochester's life, he married a young woman from a rich family out of pure greed. Bertha Mason, his wife, "Caught the germ of insanity," according to Mr. Rochester, soon after their marriage. She had to be pent up in a third story apartment within Thornfield Hall, a mansion of his, for the remainder of her existence. Once this is revealed to Jane, she is forced to make a decision. She feels she would lose her self esteem and pride if she's made his mistress, so she chooses to leave him, once again exerting her feminist belief that the will to choose is permissible. ...read more.

In this given time period, higher class individuals have the will to define what the "correct behavior" is. Women of lower class have no ability to voice her opinion. Eventually, Jane could not endure one more brutal attempt from John Reed. She decided to strike against him to defend herself. This act of rebellion was additional evidence of femininity. If John Reed is able to get away with his actions with out his mothers punishment then Jane should do him justice by rebelling against John. As a result, she was locked in the red-room as a punishment. At the time period, the social differences allow higher class individuals to be "masters" and lower class individual to be "servants." Unfortunately, this "norm" is acceptable in the Victorian-era. However, Jane Eyre demonstrated and proved herself to be an equal to John Reed by this attempt. Jane Eyre believes in the equality of social status of men and women; servants and masters. John Reed cannot overpower her because he is a man or a master and she is a woman or a servant but they are equal. Feminists exert a belief that women and men are, and have been, treated differently by our society, and that women have frequently and systematically been unable to participate fully in all social arenas and institutions; a desire to change that situation; that this gives a "new" point-of-view on society, when eliminating old assumptions about why things are the way they are, and looking at it from the perspective that women are not inferior and men are not "the norm." As a feminist writer, Charlotte Bronte confronted societal expectations and limitations of middle-class women, based on birth and gender. Jane Eyre, a character created by Bronte who was born into the middle-class family and as a woman experienced a multitude of struggles and difficulties due to her social status and gender. However, Jane Eyre sought to overthrow the tyranny of societal limitations and constraints by manifesting the freedom to love, freedom to speak their minds and freedom to be equal. ?? ?? ?? ?? 1 ...read more.