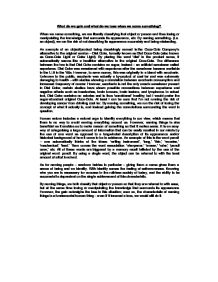 The Gain and Loss of Naming

What do we gain and what do we lose when we name something? When we name something, we are literally classifying that object or person and thus losing or manipulating the knowledge that surrounds its appearance, etc. By naming something - (i.e. an object), we run the risk of not describing its appearance accurately and being misleading. An example of an object/product being deceivingly named is the Coca-Cola Company's alternative to the original version - Diet Coke, formally known as Diet Coca-Cola (also known as Coca-Cola Light or Coke Light). By placing the word 'diet' in the product name, it automatically seems like a healthier alternative to the original Coca-Cola. The difference between the two is that Diet Coke contains no sugar, instead - an artificial sweetener called aspartame. ...read more.

In actual fact, Diet Coke contains no calories and is thus 'considered' healthy; but I would prefer the sugar-abundant original Coca-Cola. At least I can be sure that I'm not running the risk of developing cancer from drinking coal tar. By naming something, we run the risk of losing the concept of what it actually is, and instead gaining the connotations surrounding the word in question. Human nature includes a natural urge to identify everything in our view, which means that there is no way to avoid naming everything around us. However, naming things is also beneficial as it enables us to make reason of something so that it makes sense. It is an easy way of categorising a large amount of information that can be easily recalled in our minds by the use ...read more.

By using a single word, the object can be referred to with the least amount of effort involved. As for naming people - newborn babies in particular - giving them a name gives them a sense of being and an identity. With identity comes the feeling of self-awareness. Knowing who you are is necessary for success in the ruthless society of today, and the ability to be successful is dependent on the single achievement of this characteristic. By naming things, we both classify that object or person so that they are referred to with ease, but at the same time losing or manipulating the knowledge that surrounds its appearance. However, the gain outweighs the loss in this situation; even so, the characteristic of naming things is a fundamental human thing - even if it incurred a loss, we would still do it. ...read more.