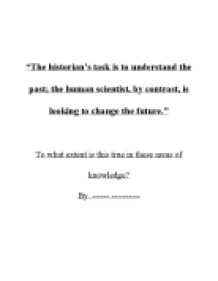 The historians task is to understand the past the human scientist, by contrast, is looking to change the future. Is this true?

Another example would the way historians scrutinized the black plague. By looking into the housing of people who were affected by the disease they were able to discover a link between rats and the illness. By knowing the source of the bubonic plague, scientists were able to find a cure. This discovery then helped prevent future diseases as people became less affected by it. Commoners and nobles knew that rats were the cause of this and thus were able to apply prevention techniques to their own homes. In comparison, the human sciences rely on both logical understanding and ability to make reliable predictions. Examples of subjects that are part of the human sciences include anthropology, psychology, economics and geography. By formulating theories to predict human behavior, human scientists then develop solutions for the problems identified by those behaviors. The malthusian theory , for example, shows that the human population grows at an exponential rate while food supplies grow at an arithmetic rate. Populations, therefore, will outgrow their food supplies and either famine, disease, or wars will bring the population back down again 3. ...read more.

This response to legitimate authority is learned in a variety of situations, for example in the family, school and workplace' 5. This discovery was not only useful in determining how people were influenced into committing atrocities during the world war, but also succeeded in portraying how human behavior can be altered by another human being who stands as an authority figure. The statement ?The historian?s task is to understand the past; the human scientist, by contrast, is looking to change the future.? can be seen as a true statement for the two areas of knowledge. Historians do often explore previous events to help them understand the past. Whilst Human Scientists seek to make theories and experiments which would help them 'change the future'. However Historians often make observations which can affect the future. The observations made on the Black Plague for example, helped us develop cures to prevent it. Also, human scientists can choose ro move away from looking to 'change the future', for example philosophers may choose to instead better understand the current human behaviors. In conclusion, it is not fair to label an area of knowledge with only one task. These two areas of knowledge explore many different things and giving them only one task would simply not allow them to reach their optimum potential. ...read more.