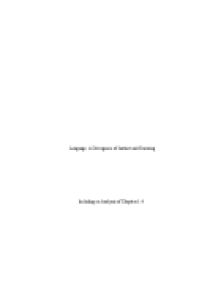 The Language Instinct - theories of Pinker and Chomsky

﻿Language: A Divergence of Instinct and Knowing Including an Analysis of Chapters 1-4 Rishi Seshadri TOK 5/2/13 Word Count: 1167 Pinker outlines his argument: ?Language is a distinct piece of the biological makeup of our brains. Language is a complex, specialized skill, which develops in the child spontaneously, without conscious effort or formal instruction, is deployed without awareness of its underlying logic, is qualitatively the same in every individual and is distinct from more general abilities to process information or behave intelligently.? He claims cognitive scientists describe it as psychological faculty, mental organ, neural system, and a computational mode, he prefers the term ?instinct.? Pinker?s two main arguments are the infinite variety of sentence combinations and utterings and the lack of formalized instruction in very young children. He supports Chomsky?s view that language is an evolutionary adaptation. In the third chapter, Pinker dissects the issue of linguistic determinism and criticizes the work of Whorf and his language studies. He suggests that one cannot use language to think because its ambiguous, it lacks logical explicitness, co-referencing issues muddle it, and the use of deictic terms. ...read more.

We can imagine a thought that is not communicated, or that is not expressed in language, but we cannot imagine one that could not be communicated. When you are not sure how to express yourself, that means you have a half-formed thought, or a vague thought, not a crisply-defined thought that defies expression. With this in mind, it is interesting to look at the examples that Pinker uses to argue for the primacy of thought over language. For most thought, the medium of communication is language. But more primitive behavior can communicate very simple thoughts. This is what is happening in the example of a baby looking surprised when it sees one object suddenly turn into two. Pinker seems to imply that the baby is not just thinking "wow!", but something more sophisticated, such as "I assume that things don't split into two like that, but this sense data is inconsistent with my assumption. I must look more closely." These sentences may be related to what is in a good cognitive science model of the baby's behavior, but to say the baby is actually thinking this is silly. ...read more.

Meanings belong, according to the universal grammar thesis, to a deep semantic structure while sounds belong to a surface phonological structure; and what connects the two are syntactic rules. Secondly, he presents the view that essential idea that such a system is both required by all human languages, and acquired too quickly by human individuals to be accounted for by a range of cultural, social or environmental stimuli. It seems that every sentence must exist in some ready-made form before it can go through some transformational process. However, this account seems to miss a key aspect of language production: that most sentences develop in time. While a well formed sentence may be reverse-engineered into its constituent parts, it seems unlikely that this is how such sentences are always generated in the first place. This view, in a sense, misses the key aspect of absurdity in language. Humans do not consider the vast implications of their words, neither do they consider the grammatical constituents that form the basis of language. There is a sense of randomness present in language. Moreover, the extent to which randomness or instinct plays in the individual's use of language is even greater than one's understanding of language. ...read more.