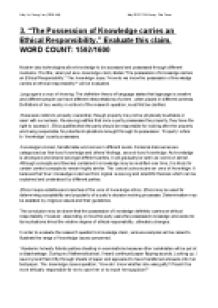 The Possession of Knowledge carries an Ethical Responsibility. Evaluate this claim.

﻿Kitty Yu Chung Yan (1206-144) May 2013 TOK Essay, Title Three 3. ?The Possession of Knowledge carries an Ethical Responsibility.? Evaluate this claim. WORD COUNT: 1592/1600 Modern-day technologies allow knowledge to be accessed and possessed through different mediums. The title, when put as a knowledge claim, states ?The possession of knowledge carries an Ethical Responsibility.? The knowledge issue, ?How do we know the possession of knowledge carries an ethical responsibility?? will be evaluated. Language is a way of knowing. The definition theory of language states that lagnuage is creative and different people can have different interpretations of a term, when placed in different contexts. Definitions of key words, in context of the research question, must first be clarified. Possession refers to property ownership; though property may not be physically touchable or seen with our senses. Reasoning justifies that once a party possesses the property; they have the right to access it. Ethics justifies that the party should be responsible for looking after the property and being responsible for potential implications brought through its possession. ?Property? refers to ?knowledge? a party possesses. Knowledge is broad, transferrable and comes in different levels. Personal discoveries are categorized as first-hand knowledge and others? findings, second-hand knowledge. ...read more.

Since they are costly to develop and produce, they are often produced with assistance of tax-revenue-based government subsidies. With my sister participating in a clinical study for GARDASIL* vaccine development, the knowledge issue, ?How do we know whether it is ethically responsible for the pharmaceutical company to test their vaccine on schoolgirls?? arises. My sister?s voluntary participation was due to the vaccination being free of charge. Reasoning and emotion suggest that the free vaccinations would benefit her from ?cervical, vaginal and vulvar cancers and genital warts.? (Knowledge claim from the pharmaceutical company.) Participation meant permission for the pharmaceutical company to possess my sister?s experimental data, in the form of Statistics (Mathematics, an area of knowledge). If the pharmaceutical company stuck to their promise of keeping all experimental data confidential, as agreed upon when the parties involved signed the contract, it would be considered as ethically responsible for the company to possess my sister?s experimental results. Since the contract was written in English and orally explained to my family in Cantonese prior to signing, language was a communication barrier because there could be translation errors, terms with secondary meanings and untranslatable terms in the contract. Overall, it was ethically correct for the pharmaceutical company to possess knowledge of my sister?s personal information because permission was granted by the parties involved. ...read more.

Biologically, the natural sciences justify that physical health issues have made some individuals incapable of ten-printing. With the reasons put together, the human sciences argue that it is ethically irresponsible for the US government to possess knowledge of individuals? ten-prints because some parties may feel emotionally insulted. Ethically, some may even feel that they have lost their dignity. These factors raise the knowledge issue, ?How do we know which individuals should be excluded from ten-printing; and would it be considered ethically irresponsible if they did not ten-print?? Sense perception and reasoning suggest that it is scientifically possible for other methods to be used to trace crime suspects. This may be done by DNA profiling ? a technique discussed in Higher Biology. However, with practical experience of conducting DNA profiling at a workshop (CAS Minor) and in class, I personally think the process of DNA profiling is complicated because it requires excellent skills with micropipettes and scientific equipment. Moreover, it is not very reliable because slight contaminations caused by human actions would impact significantly on the accuracy of results collected. In conclusion, after consulting various examples concerning possession of knowledge and their ethical implications, I realized that the possession of knowledge definitely carried an ethical responsibility. However, ethical leeway may be allowed depending on the nature of knowledge a foreign party possesses or wants to possess. ...read more.