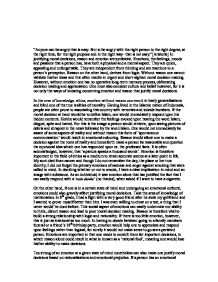 "Anyone can be angry-that is easy. But to be angry with the right person to the right degree, at the right time, for the right purpose and in the right way- that is not easy."[Aristotle] In justifying moral decisions, reason and emotion are symbiotic. Emotions, the feelings, moods and passions that a person has, have both a physical and a mental aspect. They are quick, appealing and unforgettable. They are independent from thinking and are reactions to a person's perception. Reason on the other hand, derives from logic. Without reason one cannot validate his/her ideas and this often results in urgent and short-sighted moral decision making. However, without emotion one has no operative long-term memory process, obliterating decision making and appreciation. One must also consider culture and belief however, for it is not only the ways of knowing concerning emotion and reason that justify moral decisions. In the area of knowledge, ethics, emotion without reason can result in hasty generalisations and blind one of the true realities of morality. Having lived in the Islamic nation of Indonesia, people are often prone to associating this country with terrorists and suicide bombers. If the moral decision at hand would be to define Islam, one would immediately respond upon his hidden contents. He/she would remember the feelings evoked upon hearing the word Islam; disgust, spite and hatred. For this is the image a person would retrieve, upon seeing pictures of debris and shrapnel in the news followed by the word Islam. ...read more.

Too strong of an emotion at a given state of mind nonetheless can also make one justify moral decisions based on rationalisations and emotional prejudice. If a person has an emotional prejudice against African Americans, she/he will only consider the culprits and overlook the Samaritans. This makes it very difficult to be objective as this assumption is based on an emotional fallacy. She/he would conclude in saying that they are 'criminals' and 'only harm people.' Reason in this case would allow one to remonstrate the assumption and consider the wider context. Emotion nevertheless is a vital source of energy and not purely a manufacturer of bad reasons. Emotions do not only distort reasoning however, they also make a person make short-sighted decisions in a situation of a turbulent emotion, such as anger. It is often the case that a person regrets this decision afterwards and justifies this irrational behaviour on temptation. After a person has finished his IB exams and hasn't reached his desired points, she/he would most likely be angry and this would be passed on to his moral decision making and furthermore result in emotive language. The conflict between emotion and reason and is often one of heart vs. head. Though a person might clearly see an emotion as an obstacle to justifying a moral decision, it is often the case that emotion distorts reasoning. In Germany, after finishing primary school, there area four types of school that students can go to depending on their intellect. ...read more.

She had to decide between both reason and emotion (scorn her son and family) or belief (family, regardless of culture). Emotion of course, whether conscious or subconscious told her to tell her son to find another woman, advocated by reason, as accepting this German women would logically disdain the Dutch family. She then told me that she no longer saw my mother, brother and me as Germans, but as her daughter in law and grandchildren, respectively. Irrespective of emotion and reason, belief has lead to a change in the corresponding emotion and reason. Both reason and emotion can easily result in bad reasoning to justify a moral decision. Too much of one is as irrational as too little of the other. Too much emotion can often distort ones beliefs and blind a person of the reality, as is often the case that with prejudices. Reason allows one to check the emotional conviction against the roots of reality, but too little emotion would mean that a person would have no medium of long term memory and manner of appreciation. To arrive at an objective sensible position, emotion is a key player both mentally and intellectually. In justifying moral decisions it is however, both an intuitive matter of the heart and rational reasoning of the head. One needs to weight down the two ways of knowing to arrive at a balanced outlook. Belief and culture on the other hand can also cloud ones judgement and justification of moral decisions, as this is central to an individual's mental mind. ...read more.