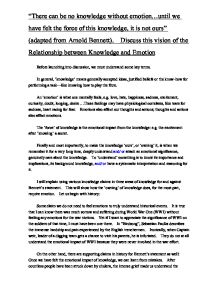 &quot;There can be no Knowledge without emotion...until we have felt the force of this knowledge it is not ours&quot; (adapted by Arnold Bennett). Discuss this vision of the relationship between knowledge and emotion

"There can be no knowledge without emotion...until we have felt the force of this knowledge, it is not ours" (adapted from Arnold Bennett). Discuss this vision of the Relationship between Knowledge and Emotion Before launching into discussion, we must understand some key terms. In general, 'knowledge' means generally accepted ideas, justified beliefs or the know-how for performing a task-like knowing how to play the flute. An 'emotion' is what one mentally feels, e.g. love, hate, happiness, sadness, excitement, curiosity, doubt, longing, desire...These feelings may have physiological correlates, like tears for sadness, heart racing for fear. Emotions also affect our thoughts and actions; thoughts and actions also affect emotions. The 'force' of knowledge is the emotional impact from the knowledge: e.g. the excitement after 'knowing' a secret. Finally and most importantly, to make the knowledge 'ours', or 'owning' it, is when we remember it for a very long time, deeply understand and/ or attach an emotional significance, genuinely care about the knowledge. To 'understand' something is to know its importance and implications, its background knowledge, and/ or have a systematic interpretation and reasoning for it. ...read more.

Thus my emotions of passion help me retain and truly "own" this knowledge. An even more interesting counter claim against the need of emotions to gain knowledge is that emotions can block scientists from learning something new. Taking a more modern example, the stubborn emotions of contemporary scientists rejected Carl Woese's discovery that Archaea was the third fundamental type of living organism (the other two being prokaryotes and eukaryotes). Therefore we can see how gaining of new knowledge can be blocked by emotion. Yet at the same time, we could argue that Woese needed the emotion of obstinate determination to make many more observations, to finally convince the scientific public. I too learnt about the great necessity of perseverance to carry out so many experiments in science to provide support for theories. During my group four project, my partner and I had done forty-six tests, checking nitrate levels in soil samples, which was already an exhausting experience. This point leads on to another knowledge claim, but which supports Bennett's statement: Before discoveries are made, emotions are needed to drive scientists to knowledge. Just last year, NASA found ice in the soil of Mars, suggesting how there could be water on the planet, possibly even extraterrestrial life. ...read more.

Instead of explicitly stating they are "secretly happy", Austen describes "smiles reined in, spirits danced in private rapture." If I were emotionless, I would simply think this is a more elaborate, fancy way of saying the same thing: metaphors therefore being a waste of ink. Fortunately I do have emotions. By empathizing with them and imagining their exquisite joy and titillating tenderness, I can appreciate Austen's craft of conveying this deeper emotional meaning to the reader with vivid imagery. Likewise, emotions help us understand the beauty and effect of music. In "Somewhere" by Within Temptation, the voices are long drawn calls; the music floods the ears with a resonating, languid richness. The music instantly stirs me with a deep, moving poignancy. Yet I would not be able to understand the alternating moments of soul-deep sorrow and lingering hope, if I could not feel emotions. Instead, I would probably say dispassionately that "Somewhere" is simply a specific combination and interaction of notes, rhythms, melodies and voices-nothing to fuss about at all. Therefore, despite some counter claims that are reasonable to an extent, there are far more supporting claims, all strengthened by evidence that propose Arnold Bennett's claim. Thus, essentially, knowledge will not be "ours" until we have felt the emotional "impact" of it. Word Count: 1489 (not including title) ?? ?? ?? ?? ...read more.