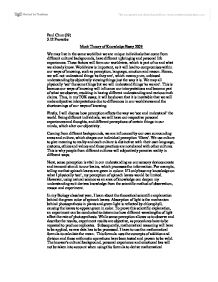 Paul Chun (19) 5.12 Proverbs Mock Theory of Knowledge Essay 2009 We may live in the same world but we are unique individuals that come from different cultural backgrounds, have different upbringing and personal life experiences. These factors will form our worldview, which is part of us and what we already know. Worldview is important, as it will lead to compromises within our ways of knowing, such as perception, language, emotion and reason. Hence, we will not understand things 'as they are', which means pure, unbiased understanding by objectively viewing things just the way it is. We may all physically 'see' the same things but we will understand things 'as we are'. This is because our ways of knowing will influence our interpretations and become part of what we observe, resulting in having different understanding and various truth claims. Thus, in my TOK essay, it will be shown that it is inevitable that we will make subjective interpretations due to differences in our worldviews and the shortcomings of our ways of knowing. Firstly, I will discuss how perception affects the way we 'see and understand' the world. Being different individuals, we will have our respective personal experiences and thoughts, and different perceptions of certain things in our minds, which alter our objectivity. Coming from different backgrounds, we are influenced by our own surrounding areas and culture, which shapes our individual perception 'filters'. ...read more.

This example highlights how if I based my knowledge just on what my sense perception tells me; I would be limited in my subjective perspective. Sense perception can be used to make observations but we also need to rely on objective knowledge, such as established scientific explanations that have been proven through the scientific method and mathematical reason to help in forming logical conclusions and deepen our understanding. Secondly, I will discuss how language affects the way we interpret reality. Language directly influences our thoughts as it gives us the words for expression, allowing us to label, make classifications by breaking reality up into different groups. This influences the kind of value judgments we make, and we understand the world according to who we are as an individual. Language is important in study of human sciences such as sociology of cultures. When my friend lived in Canada, most Canadians felt uncomfortable when she addressed people older than her as 'Uncle' or 'Aunt', which is accepted as the societal norm in Singapore. Instead, she was asked to address them by first names as they feel that family members should only use these titles. From this experience, we know that addressing older people by their first names is not perceived as disrespectful in all cultures. In contrast, the Baba Malay language in her Peranakan culture gives emphasis to rank and reinforces hierarchal distinctions through the honorific title system that denotes familial relationships. ...read more.

If Japanese historians used the word 'massacre', it would mean that Japan is accepts full responsibility for their actions. This will put their Emperor in an unfavorable position, and Japanese were obligated to protect the Emperor's divine status. This illustrates how we interpret history 'as we are' as the language that historians use in their interpretations makes it difficult to differentiate between biased historical interpretations and factual reports describing the event in itself. In conclusion, I believe that we experience the same reality but because we bring our already gathered knowledge into new evidence, we end up interpreting things according to who we are. This means that I, the 'Observer' will become part of what is observed. Although there are shortcomings in using language and perception as our ways of knowing in interpreting and understanding reality, we can rely on logic and reason through the use of mathematics as an objective area of knowledge to aid us in seeing things 'as they are' and understanding the world less subjectively. Using the clich� old saying of 'Is the cup half empty or half full', we know that we can also look at things from different angles and our interpretations may all be correct. Thus, it is important for us to keep an open mind on various viewpoints for a balanced interpretation. We should distinguish the factors that affect our ways of knowing and understand that we cannot only rely on our individual interpretations in viewing things due to its one-sided, subjective nature. ...read more.