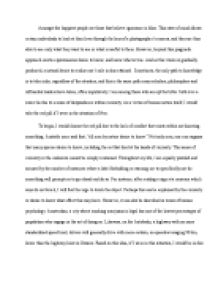 ﻿Amongst the happiest people are those that believe ignorance is bliss. This state of mind allows certain individuals to look at their lives through the lens of a photographer?s camera, and they are thus able to see only what they want to see or what is useful to them. However, beyond this pragmatic approach exists a spontaneous desire to know, and know what is true. And as this vision is gradually produced, a natural desire to realize one?s role is also attained. Sometimes, the only path to knowledge is to take risks, regardless of the situation, and this is the same path many scholars, philosophers and influential leaders have taken, often impulsively. I am among those who accept the bitter truth over a sweet lie due to a sense of despondence within curiosity. As a victim of human nature itself, I would take the red pill if I were in the situation of Neo. To begin, I would choose the red pill due to the lack of comfort that exists within not knowing something. ...read more.

Plato describes that one?s soul is in a prison, and attempts to peer out at reality through the bars, in order to escape. Overall, curiosity is an uncontrollable state in which the individual desires to know what is unknown. Also, throughout many situations, knowledge of a bitter truth overcomes the belief in a pleasant lie. Although it is awful and quite difficult losing a belief as illustrated in the Allegory of the Cave, where the prisoner explains to his peers of a reality which they are unable to believe in. In the Matrix, Neo is forced to accept the truth that this society is in fact controlled by a series of computers which perform on the basis of artificial intelligence. Nonetheless, it is often necessary in order to survive throughout the long run. As humans, there are several instances where we come to realize our beliefs are untrue or incorrect. For example, my last girlfriend and I shared many memories spanning approximately a year in which we felt we were in love. ...read more.

He asks Morpheus why his eyes hurt and it is because he is using them for the first time. Similarly, if I took the red pill, although I would be initially blinded, I would finally see what reality actually is, the greatest enlightenment that exists. While growing up, my mother has told me that sometimes, the largest part of growing up is taking control of one?s life. Ultiamtely this results in the ability to direct one?s life in the direction one desires. In the Allegory of the Cave, the once-real shadows are merely images created by the sun for the prisoner that is released. The Matrix, based off of this idea, also consists of a reality where humans provide energy for the machines. Neo and his acquaintances know they are slaves and by taking the red pill, I would realize my true purpose which could perhaps as a source of energy. Nevertheless, I would be able to take control over my mind. The discovery of the truth and grasp of control allow a person to become enlightened to his or her reality, and this is only possible through the consumption of the red pill. ...read more.