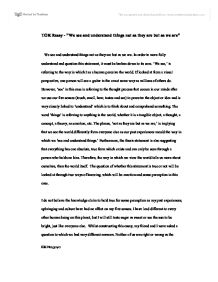 Tok Essay. We see and understand things not as they are but as we are. In order to more fully understand and question this statement, it must be broken down to its core.

Furthermore, my knowledge has been limited by the fact that I can only see the world through my eyes, as I have no experienced the way in which someone else acquires knowledge through sense perception. A counter claim to my belief that 'we see and understand things not as they are but as we are' is untrue can be seen in human defects. I have a lot of trouble seeing without glasses or contact lenses, and in this way I see a passage or text very differently to those with perfect vision. Therefore, I am perceiving as I am, but this unique way I visually perceive things does not come from a bias which stemmed from a my past experiences, culture or upbringing. However, a visual stimulus which reflects one's self exists, and is known as perceptual set. Perceptual set theory stresses the idea of perception as an active process involving selection, inference and interpretation. Perceptual set is a bias or readiness to perceive certain aspects of available sensory data and to ignore others. However, in my personal experience visual perception does not always reflect a person's bias accurately. I noticed this during a theory of knowledge lesson in which the class was shown a picture which was meant to be seen as either a rabbit or a duck. Seeing the duck indicated that your read from right to left (not the western world) ...read more.

Furthermore, I have also learnt that humans possess innate qualities, with emotion being one of them. I moved from Japan to Australia when I was seven and noticed that the way people feel and show their emotions is exactly the same despite the very different cultures. Babies cry when they are sad and smile when they are happy, which indicates that the same emotions are felt amongst all humans despite their personal experiences, upbringing, culture or lack thereof. We see and understand things not as they are but as we are rings true in the case of emotion as a way of knowing but not sense perception, in my personal opinion. I believe that we can only utilize our senses objectively as everyone sees, hears, feels, smells and tastes in the exact same way. This being said, there are rare cases present in which the five senses can be utilized in order to reveal a subjective truth about an individual. Perception set was used as an example. Emotion on the other hand is very subjective as we as humans do not all feel the same way about 'things.' Furthermore, we as the knower can choose to feel a certain way in many instances which again, is a very personal or subjective way of 'understanding and seeing things.' However, natural science has suggested that emotions are innate qualities and all human's possess the same ones. ?? ?? ?? ?? Riki Nagoya ...read more.