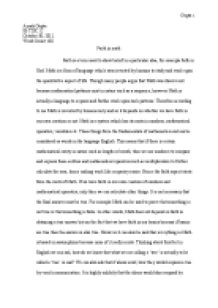 ﻿Gupta Ayush Gupta IB TOK 12 October 30, 2012 Word Count: 482 Faith in math Faith is a term used to show belief in a particular idea, for example faith in God. Math is a form of language which was invented by humans to study and work upon the quantitative aspect of life. Though many people argue that Math was discovered because mathematical patterns exist in nature such as a sequence, however Math is actually a language to express and further work upon such patterns. Therefore according to me Math is invented by humans only and so it depends on whether we have faith in our own creation or not. ...read more.

Hence the faith aspect starts from the roots of Math. If we have faith in our own creation of numbers and mathematical operators, only then we can calculate other things. It is not necessary that the final answer must be true. For example Math can be used to prove that something is not true or that something is false. In other words, Math does not depend on faith in obtaining a true answer but on the fact that we have faith in our basics because if basics are true then the answer is also true. ...read more.

That?s because we have created our English language. In a similar way what we are calling one centimeter might be something else. We are just wording it for communication and calculation by using Math! Hence it is very important that we have faith that a particular length that we see in real life is actually ?10 meters? (for example) so that we can proceed to find the area or volume. To conclude faith is very important in Math because if we don?t have faith in the system that we have developed, then we won?t be able to use it appropriately to solve problems. It doesn?t matter that the system doesn?t exist in real life, what matters is faith in the rules of Math. ...read more.