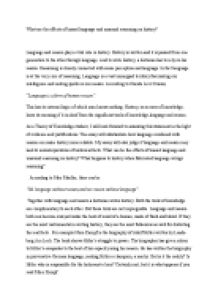 TOK: What are the effects of biased language and unsound reasoning on history?

﻿What are the effects of biased language and unsound reasoning on history? Language and reason play a vital role in history. History is written and it is passed from one generation to the other through language. And to write history, a historian has to rely on his reason. Reasoning is closely connected with sense perception and language. In fact language is at the very core of reasoning. Language is a vast unmapped territory fascinating our intelligence and casting spells on our reason. According to Claude Levi Strauss, ?Language is a form of human reason?. This has its internal logic of which man knows nothing. History, as an area of knowledge, loses its meaning if it is aloof from the significant tools of knowledge-language and reason. As a Theory of Knowledge student, I will look forward to assessing this statement in the light of evidence and justifications. The essay will substantiate how language combined with reason can make history more reliable. My essay will also judge if language and reason may lead to misinterpretation of historical facts. What can be the effects of biased language and unsound reasoning on history? ...read more.

Reports from eyewitnesses play an important role in the development and propagation of beliefs but history is not an eyewitness account. Evidence can often be manufactured and ambiguous, and prejudices are common. For example, it is claimed by many historians that Alexander the great died of poisoning, while others argue that he died of a mysterious illness. Moreover, history is a written record of the past. It is illustrated through a language, which may itself be subject to prejudice, bias and discrimination. Language and opinions of the historians are not immune from cultural bias. The history of the Norman Conquest written by William of Malmesbury is far different from that of Anglo-Saxon chronicles. According to a school of philosophy, called rationalism, reason is the most significant resource to increase knowledge. Rationalism is the doctrine or theory that reason rather than experience is the foundation for certainty in knowledge. It is a tool that seems to give us certainty. It helps us discover important truths. Rationalists are suspicious of knowledge based on perception on the grounds that our senses can all too easily mislead us. ...read more.

If a historian, with a biased reason, and with inherent propensity to terrorism, comes to write the history of the ghastly attack, he will justify the assaults. Not only this he can narrate the incident in such a bombastic language that the loathsome culprit may appear as a hero. The other terrorists will come before us not as criminals but as martyrs. In my opinion a historian should keep his reason and language unbiased lest the historical account should deceive the common humanity. My conclusion is not that language and reason have no role in history. To the contrary they are the pillars to the foundation of history. History is an intellectual pursuit, an activity of the reasoning mind. What is true of an individual is also true of history. There is some kind of truth about the past and that a good historian can at least help us to get closer to the truth. Like other ways of knowing, Language and Reason is a double edged tool that helps us develop consistent beliefs about the world. But language and reason should be free from the venom of faith, bias, discrimination and prejudice, or ?Happy is the nation that has no history?. ...read more.