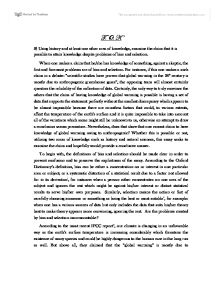 T. O. K 3) Using history and at least one other area of knowledge, examine the claim that it is possible to attain knowledge despite problems of bias and selection. When one makes a claim that he/she has knowledge of something, against a skeptic, the first and foremost problems are of bias and selection. For instance, if this one makes a such claim in a debate: "scientific studies have proven that global warming in the 20th century is mostly due to anthropogenic greenhouse gases", the opposing team will almost certainly question the reliability of the collection of data. Certainly, the only way to truly convince the others that the claim of having knowledge of global warming is possible is having a set of data that supports the statement perfectly without the smallest discrepancy which appears to be almost impossible because there are countless factors that could, to various extents, affect the temperature of the earth's surface and it is quite impossible to take into account all of the variations which some might still be unknown to us, otherwise an attempt to draw a conclusion seems premature. Nevertheless, does that show that one cannot claim to have knowledge of global warming owing to anthropogenic? ...read more.

The IPCC's studies have shown that though global temperature varies, it follows an increasing trend nevertheless. Furthermore, recordings from ice cores in the Arctic and Antarctica have shown that the amount of global CO2 gas present is the highest ever recorded. Even though, to draw a conclusion at this point is premature and will not be convincing because it seems that one will commit a "post ergo propter hoc" fallacy. But nowadays, it is commonly accepted that CO2 is a greenhouse gas, one of the major greenhouse gases that we actually have some form of control over (we do not have control over water vapor) and greenhouse gases can retain heat in the atmosphere and possibly heat the atmosphere up. And in addition, there are diagrams that show that the temperature in overall has been rising after the Industrial Revolution which contributed enormously to the atmospheric CO2 layer. Together, one may conclude that there is a rise in temperature and it is due to greenhouse gases, but to what extent, one cannot be sure, at least for the time being. In the end, small variations can be ignored because the starting point and ending point are more important in the sense that they indicate what actually happened overall. ...read more.