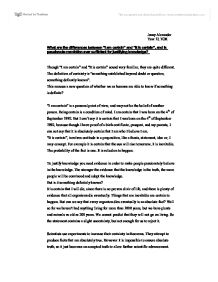 What are the differences between&quot;I am certain and it is certain&quot;, and is passionate conviction ever sufficient for justifying knowledge?

But can we say that every organism dies eventually is an absolute fact? Well so far we haven't had anything living for more than 1000 years, but we have plants and animals as old as 200 years. We cannot predict that they will not go on living. So the statement contains a slight uncertainty, but not enough for us to reject it. Scientists use experiments to increase their certainty in theorems. They attempt to produce facts that are absolutely true. However it is impossible to ensure absolute truth, so it just becomes an accepted truth to allow further scientific advancement. This is because the basic ideas are treated as fact, so that new theories can be built upon these axioms. There is always some uncertainty in every statement. ...read more.

People didn't question this theory because it seemed obvious. But the scientist proved that the earth had a gravitational force, and it was possible for the earth to be round. Now it is certain that the earth is spherical and there are many ways to prove it. Passionate conviction is a firmly held belief and may not be enough to justify the knowledge. For example a person may be passionately convinced that there is a god. But there is not enough evidence of there ever being a god. But god is used as a reason why. Why we exist, why we think, why there is a universes. These things we are also uncertain about. However for something to be an accepted truth or axiom, we need substantial evidence. A proved chain of reasoning and accepted axioms therefore effectively establishes knowledge of truth. ...read more.