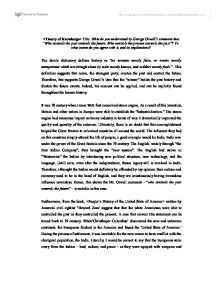 <Theory of Knowledge> Title: What do you understand by George Orwell's comment that "Who controls the past controls the future. Who controls the present controls the past"? To what extent do you agree with it, and its implications? The devils dictionary defines history as "an account mostly false, or events mostly unimportant which are brough about by ruler mostly kanves, and soilders mostly fools". This definition suggests that rulers, the strongest party, creates the past and control the future. Therefore, this supports George Orwell's idea that the "winner" builds the past history and dicates the future events. Indeed, his account can be applied, and can be explictly found throughtout the human history. It was 18 century when James Watt first conceived steam engine. As a result of this invention, Britain and other nation in Europe were able to establish the "Industrialization." The steam engine had enourmus impact on heavy industry in terms of way it dramatically improved the quality and quantity of the outcome. Ultimately, there is no doubt that this accomplishment helped the Great Bratain to colonized countries all around the world. ...read more.

Moreover, the Europeans came to the new continent in a hope that they could actualize the ideal. However, this did not happen; in fact, they have taught their children that the war was a triump and Native Indian were the people whom hindered their ancesters from establshing the idea, which are in truth, absolutely absurd story. Moreover, this idea of "great triumph" was widely depicted in Amercian movie; you have probably seen in the American movie of cowboy winning over the "evil native Indians". Therefore, again, this anecdoe agree with the idea of George Orwell - Who controls the present controls the past. Indeed, as I have discussed above, George Orwell's comment has seemed agreeable. However, at the same time, his idea does not apply in some area. Firstly, the one who controlled the may not be able to control the future, but rather to be criticized and comtempted. The former leader of "the Soviet Union", Stalin, whom was called as "The Man of Iron", was castigated by the new leader Krushchev after his death; and Krushchev launched new policy of "Destalination" that rooted out all the legacy of Stalin. ...read more.

However, we have also seen the cases where Orwell's idea did not take place; in Russia, the influence of Stalin did not passed onto the next generation; and in Austrailia, the man made history regarding to aboriginals was revised. The reason for such change was mainly people regonized such history was "created and controlled" by the winners and people know that it is not upright to commit does thing especially when it generate grief over other humankind. In conclusion, I certainly agree with George Orwell's comment but it does not apply to all circumstance. And the positive aspect is these wrong, written histories are recently being recognized and being corrected. I believe that his comment is not a wholesome direction that a party that are in charge should be heading toward. And finally, throughtout writing this essay, I have learn that it is vital for our generation to identify those made histories and to bring up ourselves to build ability to see our history in the third person's point of view rather than having strong bias or prejudice. ?? ?? ?? ?? ...read more.