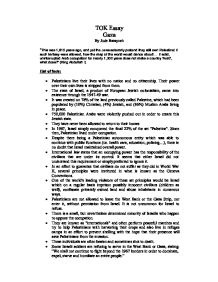 Whats going on in Gaza?

TOK Essay Gaza By Jude Batayneh "This was 1,815 years ago, and yet the Jews solemnly pretend they still own Palestine! If such fantasy were allowed, how the map of the world would dance about!... If solid, uninterrupted Arab occupation for nearly 1,300 years does not make a country 'Arab', what does?" (King Abdullah I) List of facts: * Palestinians live their lives with no nation and no citizenship. Their power over their own lives is stripped from them. * The state of Israel, a product of European Jewish colonialism, came into existence through the 1947-49 war. * It was created on 78% of the land previously called Palestine, which had been populated by (10%) Christian, (4%) Jewish, and (86%) Muslim Arabs living in peace. * 750,000 Palestinian Arabs were violently pushed out in order to create this Jewish state. * They have never been allowed to return to their homes * In 1967, Israel simply conquered the final 22% of the set "Palestine". Since then, Palestinian lived under occupation. * Despite there being a Palestinian autonomous entity which was able to continue with public functions (i.e. health care, education, policing...), there is no doubt that Israel maintained overall power. * International law states that an occupying power has the responsibility of the civilians that are under its control. ...read more.

They live in a cruel and abnormal, rather inhuman, limbo. This cannot continue at this state or else an entire nation, if not two, will be destroyed. The whole basis of this would be the fact that the Jews faced similar treatment during World War II, and found refugee in the small and resistant country of Palestine. "And yet, to ease their consciences, these Christian nations of the West are asking Palestine-a poor and tiny Moslem country of the East-to accept the entire burden. "We have hurt these people terribly," cries the West to the East. "Won't you please take care of them for us?"" Faced with this problem, there is possibly a way out. That would be giving the Israeli people themselves the opportunity to choose where they want to go. It seems unlikely that they would've wanted little Palestine had it not been the only option. A simple poll or survey is in order. Once that is done, the results should be peacefully discussed (as if such a concept exists in politics) in the United Nations. From there, we can liberate Palestine from the invasion of Israel, seeing as the land is not rightfully theirs. How can we persuade them of such? Well, considering this path was actually taken, the world would have reached a mature stage where logic is finally an element in dealing with one nation and another, rather then the constant play in arms race and propaganda. ...read more.