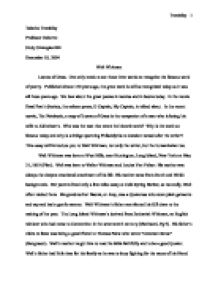 A Biography of Walt Whitman.

Tabatha Tromblay Professor Osborne Study Strategies 004 December 10, 2004 Walt Whitman Leaves of Grass. One only needs to see those three words to recognize the famous work of poetry. Published almost 150 years ago, the great work is still as recognized today as it was all those years ago. We hear about the great poems in movies and in books today. In the movie Dead Poet's Society, the solemn poem, O Captain, My Captain, is talked about. In the recent movie, The Notebook, a copy of Leaves of Grass is the companion of a man who is losing his wife to Alzheimer's. Who was the man that wrote the historic work? Why is the work so famous today and why is a bridge spanning Philadelphia to Camden named after the writer? This essay will introduce you to Walt Whitman, not only the writer, but the humanitarian too. Walt Whitman was born at West Hills, near Huntington, Long Island, New York on May 31, 1819 (Platt). Walt was born to Walter Whitman and Louisa Van Velsor. His mother was always the deepest emotional attachment of his life. His mother came from Dutch and Welsh backgrounds. Her parents lived only a few miles away at Cold Spring Harbor, so naturally, Walt often visited them. ...read more.

Walt instructed his students in the standard "Three R's" of his day, yet did not stop there. He did not want them to learn by rote, as he had to do while he was in school, but to understand the meaning and relevance of what they were learning. Frequently he read poems and asked his children to memorize them; sometimes they were his own compositions, but more often those by some of his favorite poets. He declined to use the usual corporal punishment. Instead of whipping recalcitrant pupils, he tried to change their attitudes and behavior by gentler methods such as patience, reasoning, reward and providing good examples. What he ideally wished to achieve, as an actual teacher must have been similar to the effect he later hoped to have upon would be readers of his poetry (Marinacci, Pg 44). After teaching he opened a printing office in Huntington, Long Island, starting a new weekly newspaper called The Long Islander, which is still being published to this day. After about eight months of publishing the Long Islander, Walt gave up the paper, probably on the strong advice of his backers and so it was sold. Restless, dissatisfied with his limited horizons, he had grown bored with the daily routine of his work and then began neglecting it (Rubin). ...read more.

His doctor seemed optimistic as well. Walt assured his mother that he would soon recover and return to work. Then he would buy a little house where he would have her and Eddie come and live with him. As it was, Walt employed a substitute to do his office work for him, so that he would still receive at least a portion of his salary. By May Walt was well enough to spend several hours a day on the job. Then he heard that his mother's health had suddenly and seriously failed. Alarmed, he left right away for Camden. Three days later, on May 23 his mother died, at the age of seventy-eight. Her death was the hardest blow that Walt had ever had to bear. "It is the great cloud of my life," he wrote in anguish. His mother's death coming on top of his own illness proved too much for Walt. He returned to Washington a week after the funeral. Extremely depressed and debilitated, he now accepted the Ashtons' hospitality, for he did not want to be alone (Marinacci, Pg 285). Walt Whitman lived such an amazing life doing the very best at everything he put his mind to. But at dusk on March 26, 1892, as a light rain pattered down on Camden's rooftops, Walt Whitman died, at the age of seventy-two. His soul was off at long last on that long-anticipated outward-bound journey (Marinacci, Pg 341). ...read more.