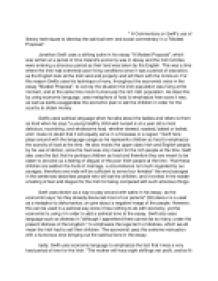 A Commentary on Swift's use of literary techniques to develop the satirical term and social commentary in a &quot;Modest Proposal&quot;.

﻿" A Commentary on Swift's use of literary techniques to develop the satirical term and social commentary in a "Modest Proposal". Jonathan Swift uses a striking satire in his essay "A Modest Proposal", which was written at a period of time Ireland's economy was in decay and the Irish families were entering a atrocious period as their land was taken by the English. This was a time where the Irish had extremely poor living conditions since it was a period of starvation, as the English took all the Irish land and property and left them with the minimum. For this reason Swifts uses his technique of irony, throughout the economist voice in the essay "Modest Proposal", to convey the situation the irish population was living at the moment, and at the same time mock humorously the rich Irish population. He does this by using economic language, uses metaphors of food to emphasize how scars it was, as well as swifts exaggerates the economic plan to sell the children in order for the country to obtain money. ...read more.

word savages in the sentences describes people who will eat the children, and it evokes in the reader a feeling of fear and disgust for the Irish for being compared with such atrocious things. Swift uses diction as a way to play around with satire in his essay, as the economist says "as they already devoured most of our parents" (28) devour is a used as a metaphor to dehumanize, an give about a negative image of the people. However, this can be used in a satirical way since it has nothing to do with economy, yet the economist is using it in order to add a satirical tone to the essay. Swift also uses language such as distress in "although I apprehend there cannot be so many, under the present distress of the kingdom." to emphasize the legal term of distress, which would mean the Irish had to sell their children. The economist uses this extreme insinuation with a humorous tone bringing out the satirical tone in the essay. ...read more.

This is shown where it says "Men would become as fond of their wives during the time of their pregnancy as they are now of their mares n foal, their cows in calf, their sows when they are ready to farrow; nor offer to beat or kick them for fear of a miscarriage." The comparison of a baby and a cow in this sentence, shows how men viewed their children as a source of income and how they in fact did not appreciate their wives, swift conveys this by using satiric language in the two complete opposite comparison between a children and a cow. It is evident that Swift uses Satirical language through literary techniques in a "Modest Proposal", throughout the economist way of writing. he does this by the use of economical language and the humor in how the economist describes the canibalism of the babies. in order to evoke his thoughts about the Irish and what was going on at the time. He indeed uses economic language, irony, and comparisons to mock the Irish people and their greed for money, specially the rich population at the time. ...read more.