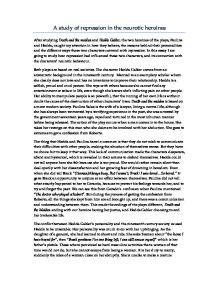 A study of Repression in the Neurotic Heroines

A study of repression in the neurotic heroines

After studying Death and the maiden and Hedda Gabler, the two heroines of the plays, Paulina and Hedda, caught my attention in how they behave, the reasons behind their personalities and the different ways these two characters contend with repression. In this essay I am going to study how repression had influenced these two characters, and its connection with the characters’ neurotic behaviour.

Both plays are based on real societies. The character Hedda Gabler comes from an aristocratic background in the nineteenth century.  Married to an exemplary scholar whom she clearly does not love and has no intentions to improve their relationship. Hedda is a selfish, proud and cruel person. She toys with others because she cannot find any entertainment or solace in life, even though she knows she’s inflicting pain on other people. Her ability to manipulate people is so powerful, that the ruining of her own life is without doubt the cause of the destruction of other characters’ lives. Death and the maiden is based on a more modern society. Paulina Salas is the wife of a lawyer, living a normal life, although she has always been tormented by a terrifying experience in the past, she was arrested by the government seventeen years ago, raped and tortured in the most inhuman manner before being released. The action of the play occurs when a man comes in to the house. She takes her revenge on this man who she claims to be involved with her abduction. She goes to extremes to get a confession from Roberto.

The thing that Hedda and Paulina have in common is that they do not wish to communicate their difficulties with other people, making the situation of themselves worse. But they have no choice but to keep it that way. This lack of communication made the characters desperate, afraid and hysterical, which is revealed in their actions to defend themselves. Hedda could not tell anyone how she felt because she is too proud. She would rather remain silent than deal openly with her dissatisfaction and her growing fear of drowning in boredom. Even when she did tell Brack “(Tesman)Always busy. But I wasn’t, Brack! I was bored…So bored.” It gave Brack an opportunity to conjure at an affair between themselves. Paulina did not tell what exactly happened to her to Gerardo, because to protect his feelings towards her, and to try and forget the past. We can see this from Gerado’s  confusion when Paulina mentioned “The doctor who played schubert”. But during the process of getting the confession from Roberto, all the things she kept from him are all brought up, and there was a communication and understanding between them. This made the endings of the plays different, Death and the Maiden ending with our heroine having her justice, and Hedda Gabler choosing to end her intolerable life.

The conflict between Hedda Gabler’s personality and the nineteenth century society caused Hedda to be miserable. Her personality was much to do with her upbringing. As the daughter of a general, she had learned to shoot and ride. She asks Tesman about “the horse I have hoped for”, then “thank goodness I’ve one thing left, I can still amuse myself” which is her father’s pistols. These where perceived as hard masculine activities that a woman of that time would not do, but she cannot escape from being a woman. It is her duty to marry, suddenly the roles of a woman close on her abruptly. She is unable to make a mature adjustment to this feminine role because of her obsession with freedom and free will. An example is at the beginning of the play when she rejects her husband Jorgen’s efforts to bring her closer to his family. She deliberately interrupts the conversation between Tesman and Aunt Julia with a comment on the ugliness of Aunt Julia's hat, which Hedda takes to be the maid's. Aunt Julia is offended, but Hedda apologizes. To defuse the situation, Tesman hopes to prompt Aunt Julia by complementing how Hedda has “filled out…rounded out” over the course of their honeymoon indicates that Hedda might be pregnant, herself immediately rejects this, her denial draws attention to how much she will not accept reality, not even trying to repress her personality to adjust to her  position. Whether she is really not pregnant of she simply does not want to accept this fact because of the thought of having a child might bind her to this life she hates so much. It also contributes to the tragic ending of the play when Hedda takes her own life. She could have taken another life at the same time. We may never know the answer to this. Her behaviour could also be because of her boredom, as she does not take the roles and duties of a wife, she does not have anything to do at all, but to take a type of revenge on other people. She has a mental desire to control the people around her, she succeeds in doing so too. To satisfy her needs, she has extreme ways of making people do what she wants, of having the power over them. For example, Thea, she is one of the victims from Hedda’s manipulation. Hedda is in every way jealous of Thea, a feeling that extends back to their school days. We also learn from their conversations that Hedda had “terrified” thea and once threat to “burn off” Thea’s hair. In the writer’s intentions, Thea is also a character to bring out Hedda’s  personality, their stong contrast makes the readers notice how different Hedda is.  But no matter how much Hedda hates Thea, she still has to use her to get what she wants. We learn from the play that Hedda has had association with Eilert lovborg before she was married, she is the woman whom the people talk about that driven Eilert off with her father’s pistols. She almost did the same to Brack who kept on hinting at a relationship between themselves. Again this is the idea of her own free will nobody could take from her. When it did, in the moment where Brack found out her involvement in Eilert’s death, he is able to compromise and manipulate her. Something that her personality will not endure, leaving her only one alternative to take her own life, as a act to defend herself, to protect herself from being imprisoned and losing her freedom. Hedda manipulating other people, is also part of her defence mechanism against reality, this only shows that Hedda is actually a very weak, in terms of controlling herself. She cannot or will not suppress her inner-self. She would rather give up her life than be powerless and dominated. Repressing her freedom had reached a limit for Hedda that she could not bear.

Paulina’s mentality has been badly affected by what had happened to her seventeen years ago. She had been repressing all her thoughts and emotions for seventeen years. Gerardo never knew what had actually happened to Paulina, because she never wanted to tell him. But the only way they are going to get over it is to “without hiding a thing from each other, together”. The damage done to her had caused her to live in acute fear. When an unfamiliar car pulled up to the house, Paulina takes action immediately, arming herself with a gun. This is her act of defence, only when she has the gun, she has the power to control and more important, the ability to protect herself. She does not do this because she has done wrong, she is just scared of the past, afraid that it would happen again, even though it is quite unlikely, she has lost faith in the government, she does not dare to trust anyone. But a chance finally comes when she can have justice, when she can have her revenge, and with her gun, she has total control. Seventeen years of repressing rage and fear, she has finally lost control of it by the sight of Roberto. Paulina’s husband is shocked and nervous to see his wife behave like this, there must have been a great contrast of how she used to behave in front of him and herself with a gun.  At first he just sees it as Paulina is “staying behind as a prisoner of the past” , “opening all the wounds” .This is also the opportunity for the husband to learn what had really happened to Paulina, and what she had been concealing in her mind. After she had got what she wanted from Roberto, Paulina made the ending appear to be that she will kill the doctor in the end, or she was expecting Gerardo would kill the man after learning the truth in detail. Whether Roberto does or does not get killed in the end is unclear to the readers. Part of this is the writer’s intentions to make us think both ways. This can also be observed as a defence of Paulina, to let her husband understand what torture she had been through, her letting the man go implies she does not take an eye for an eye and this defence just brings her a peace of mind that she still has her moral humanity, which separates her from her offenders. Or by killing him, she will never be troubled by the past again, knowing she has had revenge.

From the different way these two characters contend with repression, we cannot result in deciding who is the best. We may never know if Hedda will have the power to repress herself like Paulina for 17 years or if there is a point of repression to cause Paulina to end her own life. But in both characters, it is repression that drives them to the same kind of neuroticism.