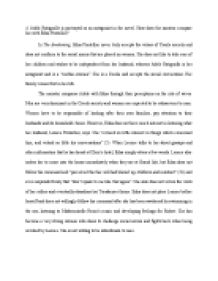 Adele Ratignolle is portrayed as an antagonist in &quot;The Awakening&quot;. How does the narrator compare her with Edna Pontellier?

﻿4. Adele Ratignolle is portrayed as an antagonist in the novel. How does the narrator compare her with Edna Pontellier? In The Awakening, Edna Pontellier never truly accepts the values of Creole society and does not conform to the social norms that are placed on women. She does not like to take care of her children and wishes to be independent from her husband, whereas Adele Ratignolle is her antagonist and is a ?mother-woman?. She is a Creole and accepts the social conventions. Her family comes first in her life. The narrator compares Adele with Edna through their perceptions on the role of wives. Men are very dominant in the Creole society and women are expected to be subservient to men. Women have to be responsible of looking after their own families, pay attention to their husbands and do household chores. However, Edna does not have much interest in listening what her husband, Leonce Pontellier, says. She ?evinced so little interest in things which concerned him, and valued so little his conversations? (5). When Leonce talks to her about gossips and other information that he has heard at Klein?s hotel, Edna simply utters a few words. Leonce also orders her to come into the house immediately when they are at Grand Isle, but Edna does not follow his command and ?perceived that her will had blazed up, stubborn and resistant? (31) ...read more.

She buys the ?pigeon house? and sustains her living by selling her sketches, using the money from her mother?s estate which is sent by his father and the money that she has won in the races. She is financially independent and free as she does not need to rely on Leonce. She can pursue what she wants without being trapped as his possession in his house. Originally, she did not feel comfortable to express her feelings and being around affectionate people, but now she dares to reveal her feelings. She has become a woman ahead of her time and speaks ?a language which nobody understood? (1), like the caged parrot that speaks Spanish. On the contrary, Adele is a conformist and confined to living in a patriarchal society. She is like a mockingbird which is caged and has limited freedom. As a mockingbird, one only knows how to echo society?s values and fails to develop independent thinking. She is also being compared to a ?ministering angel? (8). She has wings which only serve to protect her children, but she has no intention to fly and explore the world. When Edna tells her she will not sacrifice for her children and will only stay true to herself, Adele cannot comprehend at all because she only knows how to follow her duties. She thinks as a mother, one is responsible to protect her children and put her husband?s interests before her own. ...read more.

Her body is not the ?trim, stereotyped fashion-plate?. There is a sense of nobility and gracefulness about her appearance though she may not look stunning at first sight. Conversely, Adele is more feminine and matronly. Her complexion is fairer than Edna and looks like a ?faultless Madonna? (10). She has golden hair, sapphire blue eyes and cherry-colored lips. Her hands are delicate and her arms are slender. In Kate Chopin?s works, women who are independent and not motherly are portrayed as handsome people and their appearances are usually not feminine or stunningly gorgeous, while motherly women are described as feminine and angelic. This comparison is to show that if women play their role as society expects them and do not challenge social norms, then they are seen as beautiful and feminine people. Those who defy social norms are perceived as a threat to society and are not feminine or stunningly beautiful. Edna is a dynamic and round character who has transformed into a strong and independent woman who attempts to voice her opinions and find her identity, while Adele is a flat character who only follows her duties and accepts all social norms. Edna chooses to stay true to herself and fights for independence rather than sacrificing her interests for her family, while Adele places her family before herself. Edna uses art to express herself, but Adele plays music just to entertain others. The difference in their appearances also marks the contrast between their personalities and mindset. ...read more.