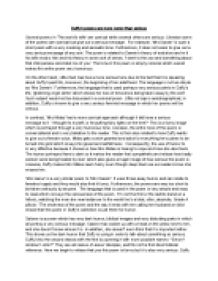 Are Duffy's poems comical or serious?

﻿Duffy?s poems are more comic than serious Several poems in ?The world?s wife? are comical while several others are serious. Likewise some of the poems are comical but give out a serious message. For example, ?Mrs Darwin? is such a short poem with a very mocking and sarcastic tone. Furthermore, it does not seem to give out a very serious message of any sort. The poem is related to Darwin?s theory of evolution and in it his wife mocks him and his theory in some sort of sense, ?I went to the zoo and something about that chimpanzee reminded me of you?. The tone in this poem is simply comical which overall makes the entire poem very humorous. On the other hand, Little Red Cap has a more serious tone due to the fact that it is speaking about Duffy?s past life, moreover, the beginning of her adulthood. ...read more.

Consequently, the use of humor to is very affective because it shows us how Mrs Midas is having to cope and how she also feels. The humor portrayed here is dark so it makes the reader feel sympathetic and reliase how badly women were being treated by men which also gives a huger image of how serious the poem is. Likewise, Duffy makes Mrs Midas seem funny even though deep down we as readers know she misses him. ?Mrs Icarus? is a very similar poem to ?Mrs Darwin?. It uses throw away humor and can relate to females hugely and they would also find it funny. Furthermore, the poems are way too short to be taken seriously by anyone. The language that is used in the poem is very simple and easy to read which conveys the seriousness of the poem. ...read more.

Andrew? John?? They are all names of Jesus' disciples, and this is the first direct biblical reference. Here we begin to reliase that yes this poem is funny but it is also very serious. Duffy ends the poem with a very casual phrase ?and ain?t life a bitch?. This phrase is so unbelievably casual, flippant and so very hysterical. Yet the poem as a whole is somewhat very serious. Anne Hathaway is an odd poem because it does not have a serious topic but it also doesn?t have a humorous one so, Anne Hathaway does not fit with any of these headings. In conclusion, Duffy uses comic to help get across a serious message but there?s also a question of why are we having to choose between humor and seriousness can?t the poems be both, why does it have to be one or the other. Duffy uses this to make her poems way more effective than they are and to also give out a feminist message. ...read more.