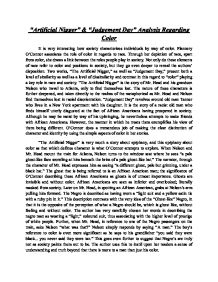 "Artificial Nigger" & "Judgement Day" Analysis Regarding Color It is very interesting how society characterizes individuals by way of color. Flannery O'Connor associates the role of color in regards to race. Through her depiction of race, apart from color, she draws a link between the roles people play in society. Not only do these elements of race refer to color and positions in society, but they go even deeper to reveal the authors' disposition. Two works, "The Artificial Nigger," as well as "Judgement Day," present both a level of similarity as well as a level of dissimilarity and contrast in this regard to "color" playing a key role in race and society. "The Artificial Nigger" is the story of Mr. Head and his grandson Nelson who travel to Atlanta, only to find themselves lost. The nature of these characters is further deepened, and taken directly to the realms of the metaphorical as Mr. Head and Nelson find themselves lost in racial disorientation. "Judgement Day" revolves around old man Tanner who lives in a New York apartment with his daughter. It is the story of a racist old man who finds himself utterly disgusted at the fact of African Americans having prospered in society. Although he may be racist by way of his upbringing, he nevertheless attempts to make friends with African Americans. However, the manner in which he treats them exemplifies his view of them being different. ...read more.

This description and re-iteration of ``blackness`` emphasizes concepts of darkness, death, and evil that a white society associates black individuals. As they dismount the train Nelson soon becomes aware that his grandfather is in fact lost. When Nelson criticizes his grandfather for having gotten them lost, Mr. Head replies, "If you want to direct this trip, I'll go on by myself and leave you right here." O`Connor then depicts Mr. Head as being "pleased to see the boy turn white." This is very ironic because Nelson is in fact white skinned. Following much talk of seeing "Nigger after Nigger," the reader is left with the feeling that Mr. Head is not only happy to have silence Nelson, but further emphasizes the very color of Nelson's face. This solidifies the character of Mr. Head as one who is so disgusted by Negros that he attempts to turn even his grandson whiter. As Nelson and Mr. Head continue on in search of the train station to take them home, they come across a rich neighbourhood of mansions. After having received directions from a passer-by, Mr. Head catches the glimpse of a plaster figure of a Negro just down the road. "One of his eyes was entirely white and he held a piece of brown watermelon." O'Connor has chosen her words very carefully. No eye is completely white, but in depicting this figure O`Connor wishes to show that in this world African Americans are forced to see the world in white. ...read more.

The author is using a play on words as coal is black in color. Several paragraphs into the story, the narrator describes "the two faces, the black one and the pale one, appeared to be wavering." O`Connor is evoking the image of a wave, by showing that there is a transition between the white man's place and the black man's place in society. Society has a very distinct manner in which it looks at and labels people; singling them out in many cases often based solely on color of skin, as opposed to their manner of dress and the manner in which they comport themselves and their character. Flannery O'Connor presents both parallels and contrast about race within these two stories. She examines how societies, both African American and white American, are able to dissociate themselves from one another. The question however remains, "why has the author chosen to address this issue in the manner that she has?" In "The Artificial Nigger," O'Connor expresses a racist Mr. Head and his grandson Nelson as having had an epiphany after having discriminated against African Americans for so long. She shows a similar idea in "Judgement Day." In this she presented the main character, Tanner, as a racist old man on the brink of death, who after years of "working niggers" finds himself in a state of helplessness at the hands of those which he has judged for so long. Flannery O'Connor does not believe Negros are as society labels them, and as a result she expresses how their confidence, role in society, and their morale has been destroyed. ?? ?? ?? ?? ...read more.