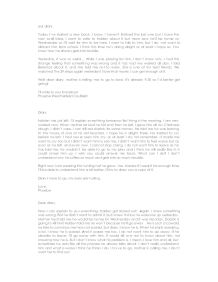 Catcher in the Rye written task + Rationale. To be able to sound authentic I tried to put myself in the shoes of a ten year old girl, while using colloquial expressions to convey the idea of intimacy, which is an important characteristic of a diary. Also

ear diary, Today I've started a new book. I know, I haven't finished the last one but I have this new swell idea. I want to write to Holden about it but mom says he'll be home on Wednesday so I'll wait for him to be here. I want to talk to him, but I do not want to distract him from school. I think this time he's doing alright or at least I hope so. You know how he always gets into trouble. Yesterday, it was so weird... While I was praying for him, I don't know why, I had this strange feeling that something was wrong and it has had me worried all day. I told Berenice about it, and she told me not to worry. She is one of my best friends. We watched The 39 steps again yesterday! I love that movie. I can get enough of it. Well dear diary, mother is telling me to go to bed, it's already 9.30 so I'd better get going! I'll write to you tomorrow! Phoebe Weatherfield Caulfield Diary, Holden has just left. I'll explain everything tomorrow first thing in the morning. ...read more.

He got all mad at me and made me feel really depressed. It is difficult to keep thinking of someone you loved so much like Allie because every time I think of him I get sad and all. But what I mean is that I feel bad because sometimes I feel kind of guilty when I don't think of him, I feel like I am making him feel sad, wherever he is in heaven. I would like him to know that it is not that I do not care or I have forgotten about him, but it hurts thinking about him all the time, and even more thinking I could loose Holden too. I hope Holden realizes how much I care about him, although yesterday I was really mad at him because he got kicked out and all. But he told me he liked to sit with me just chewing the fat and horsing, that's what he said. I liked that he said that. Yesterday he also mentioned something about wanting to be the catcher in the rye. He is nuts, that isn't even a real job and he got the song all messed up. ...read more.

There are not much direct dialogues of Phoebe in the book, as although she is a central character she appears almost at the end, making it difficult for me to have a clear idea of her rhythm and style of speech. Also being a second language speaker it was difficult to me to adopt a very colloquial way of communicating. Before reading this book I did not know about words and expressions like "swell", "phonies" and "chewing the fat", which I had to use in this written task. What I understand about the character of Phoebe is that although she is very innocent and a child, she is very mature and bright, being to an extent protective towards her brother and at times seeming older than him. She represents the process of growing up, which Holden refuses to accept. She also has dealt in a better way the death of Allie than Holden, although she is also still hurt about it. I decided to write a diary as I considered interesting to show how the same things can be perceived differently by different people. The diary is written in first person, providing the same sense of intimacy as the actual book. It also emphasizes themes of the book like childhood, growing up, relationships, intimacy and loneliness. 35/45 (for 2 courseworks) IB level 6 ...read more.