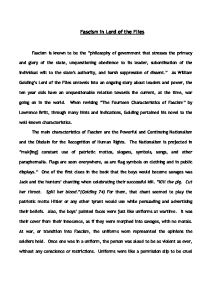 Fascism in Lord of the Flies

Fascism in Lord of the Flies Fascism is known to be the "philosophy of government that stresses the primacy and glory of the state, unquestioning obedience to its leader, subordination of the individual will to the state's authority, and harsh suppression of dissent." As William Golding's Lord of the Flies unravels into an ongoing story about leaders and power, the ten year olds have an unquestionable relation towards the current, at the time, war going on in the world. When revising "The Fourteen Characteristics of Fascism" by Lawrence Britt, through many hints and indications, Golding pertained his novel to the well-known characteristics. The main characteristics of Fascism are the Powerful and Continuing Nationalism and the Disdain for the Recognition of Human Rights. The Nationalism is projected in "mak[ing] constant use of patriotic mottos, slogans, symbols, songs, and other paraphernalia. Flags are seen everywhere, as are flag symbols on clothing and in public displays." One of the first clues in the book that the boys would become savages was Jack and the hunters' chanting when celebrating their successful kill. ...read more.

That gave Jack freedom to torment their minds into following him into anything he appointed them to do, such as, torturing their mates and being disloyal to Ralph. Another feature of Fascism is the Identification of Enemies or Scapegoats as a Unifying Cause. "The people are rallied into a unifying patriotic frenzy over the need to eliminate a perceived common threat or foe: racial, ethnic or religious minorities; liberals; communists; socialists, and terrorists." Just as Hitler found scapegoats in the Jewish population, Jack identifies to Hitler with his scapegoat as Piggy. His continuous offences towards Piggy rubbed off to the other members of the tribe, therefore, Piggy had no say in anything, except when considered by Ralph. Jack mocked him when shouting "You shut up, you fat slug!"(Golding 91) once Piggy expressed his opinion. He was expected to feel worthless, since he was not as athletic as everyone else, and had a different appearance. Jack's hatred towards Piggy made him incapable to see the right path and distracted him from the true destination that must have been attained. ...read more.

As Jack was the main meat provider, he expanded his killings into feasts, celebrating the murders and truly enjoying the executions. His final presentation of his limitless enforcement of punishment was in Chapter 10: The Shell and The Glasses; Jack had a boy tied up and beaten for no reason, except to show what happens if anyone gets in his way. Even when his followers were questioned for the trigger of Jack's actions, they had no idea what could've set off Jack, Robert stated, "I don't know. He didn't say. He got angry and made us tie Wilfred up. ...he's been tied for hours, waiting."(golding 176) As reading Lord of the Flies, the frighteningly fascist behaviour of the young boys leads one to believe more and more of Golding's intentions to open up a realistic view of the current happenings. World War II was a hard time for many nations, and even kids whose country had no fascist background got lead on by the tempting ease of following Hitler and Mussolini's footsteps. It is scary as a reader, to be a spectator of the innocent turning into monstrous savages, such as Jack and Roger. 2 Submitted By: Virginia Krusteva Submitted To: Ms. Troncone ...read more.