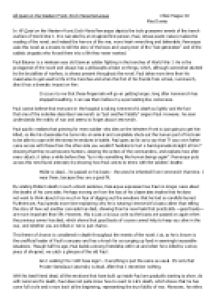 How effectively does Erich Maria Remarque portray the horrors of the First World War in &quot;All Quiet on the Western Front&quot;?

ï»¿All Quiet on the Western Front- Erich Maria Remarque Chloé Magee 4O Miss Davies In All Quiet on the Western Front, Erich Maria Remarque depicts the truly gruesome events of the trench warfare of World War I. It is narrated by an imagined first person, Paul, whose poetic nature makes the reading of the novel, and indeed the horrors of the war, more heart-wrenching and believable. Remarque uses this novel as a means to tell the story of the boys and young men of the “lost generation” and of the sadistic jingoists who forced them into a life they never wanted. Paul Bäumer is a nineteen year old German soldier fighting in the trenches of World War I. He is the protagonist of the novel and always has a philosophical take on things, which, although somewhat stunted by the brutalities of warfare, is always present throughout the novel. Paul takes more time than his classmates to get used to life in the trenches and when the first of his friends from school, Kemmerich, dies it has a dramatic impact on him: It occurs to me that those fingernails will go on getting longer, long after Kemmerich has stopped breathing. ...read more.

However, this is just a vicious cycle as the boots are passed on again when the previous owner has died, which shows that good boots of course cannot help to keep you alive in the war, and whether you are killed or not is just chance. This theme of chance is considered in depth throughout the events of the novel. Kat, as he is known is the unofficial leader of Paul's company and has a knack for scrounging up food in seemingly impossible situations. Though half his age, Paul builds a strong friendship with Kat and when he is killed by a stray piece of shrapnel, we catch a glimpse of the old Paul: Am I walking? Do I still have legs?... Everything is just the same as usual. It?s only that Private Stanislaus Katczinsky is dead. After that I remember nothing. With his best friend dead, all the emotions that have built up inside Paul are gradually starting to show. As with Kemmerich?s death, Paul does not quite know how to react to Kat?s death, which shows that he has come full circle and is now back at the beginning, representing the true futility of war. ...read more.

The second, however, is less obvious and it celebrates human endurance and loyalty to one’s comrades. These two features of the novel are perfectly represented by the characterisation of Paul Bäumer whose life is snatched away in the war, the last young man to die in his class that had joined the army to fight in the war together: He fell in October 1918... He had sunk forwards and was lying on the ground as if asleep... his face wore an expression that was so composed that it looked as if he were almost happy that it had turned out that way. This ending is narrated by an unknown person, but by the level of description –similar to Paul’s description of Kemmerich’s death– it is not outrageous to assume that he was a younger soldier who had not yet been broken by the horrors of war like Paul had been. Paul’s death as an ending has a feeling of inevitability because the reader might think that Paul would die in battle, trying to save another man’s life, but the unremarkable nature of his death is quite unsettling and makes the reader realise that Paul Bäumer is just another name in the list of young men whose lives were taken away by the First World War. ...read more.