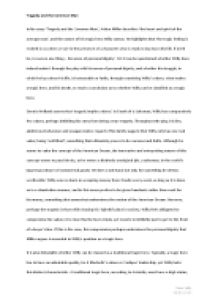 In his essay Tragedy and the Common Man, Arthur Miller describes the heart and spirit of the average man, and the nature of his tragic hero Willy Loman.

﻿Tragedy and the Common Man In his essay ?Tragedy and the Common Man?, Arthur Miller describes ?the heart and spirit of the average man?, and the nature of his tragic hero Willy Loman. He highlights that ?the tragic feeling is evoked in us when we are in the presence of a character who is ready to lay down his life, if need be, to secure one thing ? his sense of personal dignity?. Yet it can be questioned whether Willy does indeed make it through the play with his sense of personal dignity, and whether his struggle, in which he lays down his life, is honourable or futile, through examining Willy?s values, what makes a tragic hero, and his death, to reach a conclusion as to whether Willy can be classified as a tragic hero. Dennis Welland asserts that ?tragedy implies values?; in Death of a Salesman, Willy has comparatively few values, perhaps inhibiting his story from being a true tragedy. ...read more.

If this is the case, this compromise perhaps undermines the personal dignity that Miller argues is essential to Willy?s position as a tragic hero. It is also debatable whether Willy can be classed as a traditional tragic hero. Typically, a tragic hero has to have an admirable quality, be it Macbeth?s valour or Oedipus? leadership, yet Willy lacks this distinct characteristic. A traditional tragic hero, according to Aristotle, must have a high status; Miller calls his ?archaic?, and is correct in his assertion that ?the common man is as apt a subject for tragedy as kings were?. Yet whether the story of Willy, although the story of a common man, can be classified as tragedy relies on the perception of what makes a tragic hero. An Aristotelian tragic hero is a victim of circumstance; Willy does not really fit this definition, as he had the choice to leave Brooklyn and selling to go and seek his fortune in Alaska, and chose not to. ...read more.

Willy, whose life was dictated by the dreams or delusions that he constantly hoped to achieve, chooses to die because he believes he is worth more dead than alive. His misplaced notion that his death will benefit his family, both in terms of his life insurance dividend and in seeing how well-liked he really was from the crowds he imagines at his funeral is especially poignant as the audience knows neither are likely to materialise, as Willy?s dreams rarely do. The nature of his death, the abandonment of his family, in fact costs him the last shreds of his personal dignity that had largely evaporated throughout the course of the play. Although he died in an attempt to preserve what he thought was his personal dignity, he dies a foolish man rather than the great one he aspires to be. And in this sense, perhaps it is not a tragic feeling that is evoked in us, but rather one of waste, and of pity for the common man. Ciara Lally 08.11.2010 ...read more.