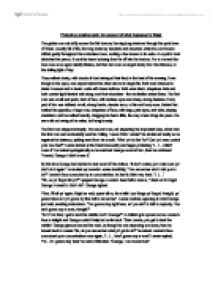 Inspired by &quot;Of Mice and Men&quot;. An Account of what happened in Weed

Producing creative texts: An account of what happened in Weed The golden sun set softly across the flat horizon; forming long shadows through the quiet town of Weed. Usually full of life, the long roads lay desolate and deserted, while the cool breeze drifted gently throughout the motionless town, rustling a few leaves in its wake. A coyote's howl disturbed the peace. It could be heard echoing from far off into the horizon. For a moment the town was once again silently lifeless, but then two men emerged slowly from the distance, in the dulling light of day. They walked slowly, with clouds of dust arising at their feet, in the heat of the evening. Even though in the open, one stayed behind the other almost in single file. Both were dressed in denim trousers and in denim coats with brass buttons. Both wore black, shapeless hats and both carried tight blanket rolls slung over their shoulders - the similarities ended there. The first man was small and quick, dark of face, with restless eyes and sharp, strong features. Every part of him was defined: small, strong hands, slender arms, a thin and bony nose. ...read more.

Lennie stood in the desolate road; like a child would if they had lost their parents, constantly looking around. The only other life around was a small mouse that quickly scurried down the road and past Lennie's feet, where a while after it came to a brutal death, as a dirty cat jumped out of the undergrowth and pounced on its prey. It consumed it quickly, tearing its head off the limp body. The cat, pleased with its reward, strutted off leaving Lennie with a look of terror. "That's a pity" a soft voice called out from behind Lennie, making him jump. He hadn't heard any footsteps approaching him. "Poor little mouse" she spoke, causing Lennie to turn around and look at her. Her face creased up in disgust, and her hand covered her mouth as though she were appalled. She was tall, with long wavy blonde hair and she wore a vivid red velvet dress. It took some time for Lennie to voice his words. "George said...I ain't to speak to anybody. I ain't to say anything. I gotta stay right here" Lennie pointed to the ground he was standing on in a childlike manner. ...read more.

"Stop it now, you'll muss it up" the girl cried angrily. "Let go now!" She tried to pull the dress out of Lennie's hands, but they were holding on so tightly it was impossible. "You let go!" The girl pulled on the dress once again but with no effect. Lennie was becoming panicked now. His face was contorting. His other hand closed over her mouth and nose. "Please don't" he begged. "Oh! Please don't do that. George'll be mad. George gonna say I done a bad thing, an' he ain't gonna let me tend no rabbits". The girl wriggled ferociously in Lennie's grip, while a muffled scream came from under his hand. A little while before this occurred, George was on his way back to Lennie; feeling guilty about leaving him on his own just to shoot pool. While walking, George thought about how Weed was beautiful beyond description. He stopped in the middle of the road to look at the striking scenery around him, closing his eyes and feeling the cool breeze gently stroke his coarse skin. Before long, the serenity was destroyed. George had followed the road around the corner to hear muffled screams and to see Lennie holding down a girl, with his hand over her mouth. George was furious. ?? ?? ?? ?? ...read more.