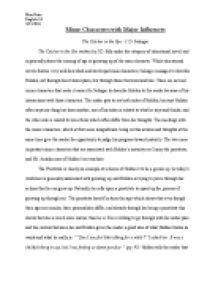 Minor Characters in &quot;The Catcher in the Rye&quot;.

﻿Max Petre English 10 3/15/2011 Minor Characters with Major Influences The Catcher in the Rye - J. D. Salinger The Catcher in the Rye written by J.D. falls under the category of educational novel and is generally about the coming of age or growing up of the main character. While educational novels feature very well described and developed main characters, Salinger manages to describe Holden, not through direct description, but through those that surround him. There are several minor characters that make it easier for Salinger to describe Holden to the reader because of his interactions with those characters. The reader gets to see both sides of Holden, because Holden often says one thing but does another; one of his sides is related to what he says and thinks, and the other side is related to his actions which often differ from his thoughts. The meetings with the minor characters, which at first seem insignificant, bring out his actions and thoughts at the same time give the reader the opportunity to judge his progress toward maturity. The two more important minor characters that are associated with Holden?s maturity are Sunny the prostitute, and Mr. ...read more.

I figured if she was a prostitute and all, I could get in some practice on her, in case I ever get married or anything.?(pg. 92), shows him again excusing the fact that he wants to become an adult, by saying he wants to get better at sex with her for later, when he is married. Holden blows off the fact that he couldn?t take advantage of the situation, but it shows the reader that Holden is indeed not ready, and it also shows that he really doesn?t want to be an adult he just feels the need to be one because of his misguided perception of the world. This is where Mr. Antolini becomes important, because he is the character who really introduces this doubt to Holden. He is able to show Holden that becoming an adult or trying to become an adult may not be the solution Holden wants or needs. Mr. Antolini is an old English teacher of Holden?s who married rich and now lives in a fancy place in New York. The introduction of Mr. Antolini really brings out the Holden?s lack of proper judgment because it seems like Holden doesn?t see Mr. ...read more.

The other characters provide a link between what he thinks he is looking for and what he ends up wanting, one such example being the prostitute; all he really wanted was to have someone to listen to him, although at first he believes he wants to have sex because this will make him a man. Salinger gives the other characters individual reasons for being in the novel, but they are all connected by the fact that they describe Holden and help us judge, understand, and relate to Holden. This is because we can understand him with greater ease when we, as readers, can see the link between his narrations of the event and his thoughts. Salinger intentionally places importance on the characteristics of the minor characters which resemble or help describe Holden; the prostitute seems young and nervous to Holden, because that is how he felt. Holden can also be described through a contrasting character like Mr. Antolini who has a clear sense of security, which we can see is lacking in Holden through his actions once he thinks his teacher is coming too close to him. If Holden were a grown up person, and would have a clear mindset, he wouldn?t need the help of the minor characters in the novel to answer questions he has about himself. ...read more.