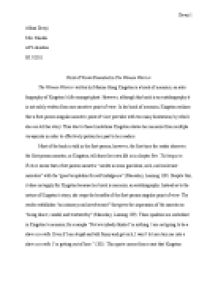 Points of View in the &quot;The Woman Warrior&quot; written by Maxine Hong Kingston

﻿Dewji Abbas Dewji Mrs. Meahle AP Literature 8/15/2011 Point of Views Presented in The Woman Warrior The Woman Warrior written by Maxine Hong Kingston is a book of memoirs; an auto biography of Kingston?s life amongst ghost. However, although this book is an autobiography it is not solely written from one narrative point of view. In her book of memoirs, Kingston realizes that a first-person singular narrative point of view provides with too many limitations, by which she can tell her story. Thus due to these limitations Kingston relates her memoirs from multiple viewpoints in order to effectively portray her past to her readers. Most of the book is told in the first-person; however, the first time the reader observes the first-person narrator, or Kingston, tell about her own life is in chapter five. Technique in Fiction warns that a first-person narrative ?results in some garrulous, arch, and irrelevant narrators? with the ?great temptation for self-indulgence? (Macauley, Lanning 139). Despite this, it does not apply for Kingston because her book is memoirs, an autobiography. Instead as to the nature of Kingston?s story, she reaps the benefits of the first-person singular point of view. The reader establishes ?an intimacy and involvement? that gives the impression of the narrator as ?being direct, candid, and trustworthy? (Macauley, Lanning 139). ...read more.

Kingston in her autobiography is an embodiment of this accomplishment. When we first come into contact with Kingston she is a shy, voiceless girl who is constantly haunted by her mother?s talk-stories. After hearing a story about a defective infant Kingston ?woke at night?[and] sometimes heard an infant?s grunting and weeping coming from the bathroom? (86). However as Kingston begins to talk at the ?American school? and tries to fit in as much as possible in the American society, she develops anger and becomes a rebellious teenager (167). There are two scenic episodes in which the reader can see quite clearly how much that voiceless girl has changed. The first of which is when Kingston tortures the ?sissy-girl? at her school (175). Alone in a bathroom Kingston squeezed and pinched her cheek, ?pulled the hair at her temples, pulled the tear out of her eyes? all in efforts to get her to talk (178). This scene emphasizes and illustrates the anger Kingston was building up inside. This anger led to another, almost climatic scene of Kingston lashing out at her mother. Out of nowhere Kingston?s ?throat burst open? screaming ?I?m going away. I?m going away anyway. I am Do you hear me?? (201). In both these scenes the ?Speech? and Kingston?s ??Behavior Towards Others? are used as ?conventional way of characterization? (Macauley, Lanning 93). ...read more.

This theme is forever looming in Kingston?s life; for example when her mother resents paying for Kingston?s birth, when numerous character calls her and the other Chinese-American girls useless, and when Kingston thinks that her parents are going to marry her off as a solution. Another theme is brought up in the very first sentence, in which Kingston?s mother tells her no to tell anybody about what she is about so say. This theme of secrecy and silence has a deep impact of Kingston?s life. She was often told to ?lie to Americans? and to ?tell them we have no crimes and no poverty? (185). The silence also affects Kingston at school in which she has to voice to talk. She says ?my silence was thickest? and that she ?spoke to no one at school? (165). These factors influenced her to the point where she flunked kindergarten and recorded an IQ score of zero. Kingston is successful in the feat of creating a beginning that is both meaningful and one that will clench the readers? attention. She uses the age-old and trustworthy technique of ?in medias res? that puts the reader in an enticing talk-story, one of many to come. Within the talk-story echoes those themes that glare at readers as they read. One is sure that Kingston?s book of memoirs is always read from cover to cover. ...read more.