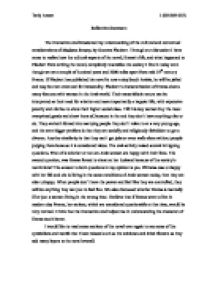 Reflective Statement The interactive oral broadened my understanding of the cultural and contextual considerations of Madame Bovary, by Gustave Flaubert. Through our discussion I have come to realize how the cultural aspects of the novel, Emma's life, and what happened to Flaubert from writing the novel, completely resembles the society I live in today even though we are a couple of hundred years and 3000 miles apart from mid 19th century France. If Flaubert has published his novel in now a day Saudi Arabia, he will be jailed and may be even executed for immorality. ...read more.

They are both forced into marrying people they don't relate to at a very young age, and the even bigger problem is that they are socially and religiously forbidden to get a divorce. Another similarity is that they can't get jobs or even walk alone without people judging them because it is considered taboo. The oral activity raised several intriguing questions. First of is whether or not are Arab women are happy with their lives. The second question, was Emma forced to cheat on her husband because of the society's restrictions? ...read more.

We also discussed whether Emma is mentally ill or just a women living in the wrong time. I believe that if Emma were to live in modern day France, her actions, which are considered questionable at that time, would be very normal. I think that the interactive oral helped me in understanding the character of Emma much better. I would like to read some sections of the novel over again to see some of the symbolism and motifs that I have missed such as the windows and dried flowers as they add many layers to the novel overall. ?? ?? ?? ?? Tariq Ameer 1 (001369-033) ...read more.