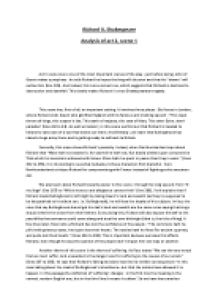 ﻿Richard II, Shakespeare Analysis of act 2, scene 1 Act II scene one is one of the most important scenes of the play ; just before dying, John of Gaunt makes a prophesy : he tells Richard he hopes the king will die soon and that his ?shame? will outlive him (line 135). And indeed, this curse comes true, which suggests that Richard is destined to destruction and downfall. This clearly makes Richard II a true Shakespearean tragedy. This scene has, first of all, an important setting. It involves three places : Ely House in London, where Richard visits Gaunt who glorifies England with his famous and insisting speech : ?This royal throne of kings, this scepter?d isle, This earth of majesty, this seat of Mars, This other Eden, demi-paradise? (lines 40 to 43). As well as Ireland ; in this scene we find out that Richard is headed to Ireland to take care of a war that broke out there. And Brittany ; we learn that Bullingbrook has raised a huge army there and is getting ready to sail back to Britain. ...read more.

So by doing this, Richard will also expose himself to the possibility that someone could come along and steal his own birthright (that is, the title of king). A few lines later, Ross tells us Richard has lost the confidence of his people : ?The commons hath he pill?d with grievous taxes, And quite lost their hearts. The nobles hath he fined For ancient quarrels, and quite lost their hearts.? (lines 246 to 248). This is important because we know this affects Richard, even though he says the opinion of the people don?t impact him one way or another. Another theme of this scene is the theme of suffering. As Ross states ?We see the very wrack that we must suffer, And unavoided is the danger now For suffering so the causes of our wrack.? (lines 267 to 269), he says that Richard?s failing decisions have led to terrible consequences ?in this case talking about the steal of Bullingbrook?s inheritance? but that the nobles have allowed it to happen. ...read more.

By the time the scene closes, we have learned of the imminent invasion of England by Bullingbrook?s forces ; a piece of information which, with what we already know about Bullingbrook?s popularity and Richard?s merited unpopularity with the English commoners, implies already the certain outcome : Richard?s deposition and defeat at the hands of Bullingbrook. The ideal of a good kingship put forward in this play ?as well as in many of Shakespeare?s plays? seems to be based on a systematic, fully integrated relationship between the king, the people and the land ; subdividing the kingdom is in any way a very bad idea. To conclude, this scene combines several important themes and events of the play : Gaunt?s condemnation followed by his death, Bullingbrook?s imminent sailing back to Britain, Richard?s devoutly loyal uncle York?s self-questioning process which will eventually drive him to Bullingbrook?s side, as well as the presence of the themes of passivity, power, suffering, language and communication, and family. And all of these aspects make this scene very significant to the play. ...read more.