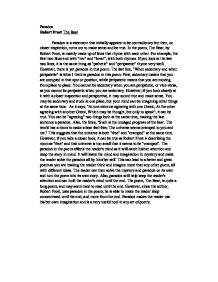 The Bear - How Robert Frost uses paradox to interest the reader.

Paradox is a statement that initially appears to be contradictory but then, on closer inspection, turns out to make sense and be true. In the poem, The Bear, by Robert Frost, is mainly made up of lines that rhyme with each other. For example, the first two lines end with "her" and "lover", with both rhymes. If you look at the last two lines, it is the same thing as "pathetic" and "peripatetic" rhyme very well. However, there is yet paradox in this poem. The last line, "When sedentary and when peripatetic" is what I think is paradox in this poem. First, sedentary means that you are occupied in that spot or position, while peripatetic means that you are moving from place to place. You cannot be sedentary when you are peripatetic, or vice-versa, as you cannot be peripatetic when you are sedentary. However, if you look closely at it with a closer inspection and perspective, it may sound true and make sense. You may be sedentary and stuck at one place, but your mind can be imagining other things at the same time.  As it says, "At one extreme agreeing with one Greek, At the other agreeing with another Greek, Which may be thought, but only to speak", it can be true. You can be "agreeing" two things both at the same time, making the last sentence a paradox. Also, the lines, "Such is the uncaged progress of the bear. The world has a room to make a bear feel free; The universe seems cramped to you and me." This suggests that the universe is both "free" and "cramped" at the same time. However, if you take a closer look, it can be true as Robert Frost is describing the room as "free" and that universe is too small that it seems to be "cramped". The paradox in the poem effects the reader's mind as it will catch his/her attention and keep the story in mind. It will leave the mind and imagination in mystery and make the reader solve the paradox all by him/her self. This can lead to a better and great poem as you are making the reader think and imagine more than any other poem, all with different ideas. The reader can then solve the mystery and paradox on its own and turn the poem into its own story. Also, paradox will help keep the reader's attention and can hold the reader's mind until the end. The poem, The Bear, is quite a long poem, and may seem hard to read until the end. However, since the author, Robert Frost, uses paradox in the poem, he is able to make the reader keep concentrated until the end, and more from the end. Paradox makes the reader use his/her own imagination and is a very useful tool in any art of poetry.