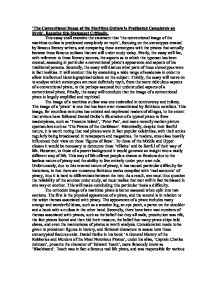 This essay shall examine the statement that the conventional image of the maritime outlaw is predicated completely on myth, focusing on the stereotypes created by famous literary writers, and comparing these stereotypes with the pirates that actuall

Daniel Defoe raises particular stereotypes, such as looting and raiding in order to generate wealth and revenue. This theme is supported by Anne Perotin-Dumon, who claims that raids on coastal towns were commonplace in Atlantic and Pacific pirating. Stemming from Daniel Defoe's ideas came the well know literary works, such as Robert Louis Stevenson's 'Treasure island', and James Matthew Barrie's 'Peter Pan', such great prominence in literature for generations to come. It was the latter that used the image of a hook to cement the fearful nature of 'Captain Hook', nemesis of the hero in his popular children's novel. Treasure Island was also responsible for creating a popular pirate stereotype of 'walking the plank', and as Pennell argues, despite Treasure Island being a fictional novel, walking the plank did in fact occur on occasion. Daniel Defoe's brilliance can be attributed to the fact he made such a prominent figure in literature from what is often described as a 'mediocre' pirate. Although he has also been described by his creator as a courageous man who might have been a hero had he been employed in a good cause. ...read more.

This proves the stereotype that the idea that the ability to be a carefree pirate is wrong. Furthermore, it is worth noting that the literature associated with pirates has often felt the need to make these pirates 'heroes'. Although this idea was started by Defoe, it has continued in popular culture to highlight these original stereotypes even further, and thus it is now very hard to see the true pirate inside these false illusions that now exist in modern literature. Conclusively, this essay has analysed in-depth the main stereotypes of what it is to be a pirate, and has demonstrated that the conventional image of a maritime outlaw is most definitely a myth. This essay has done this by first stating all the stereotypes before analysing each aspect in detail, and proving or disproving the statements. Furthermore, the essay has studied various fictional literatures to display the stereotypical pirate and compared this with academic sources to reinforce its argument and display the contrasts between the fictional pirate and the maritime outlaw. Whilst the essay has shown that there is some historical truth behind most images, they are merely an over-amplified assortment of isolated instances and should thus not be seen as common place, which is the case in the aforementioned literature. ...read more.