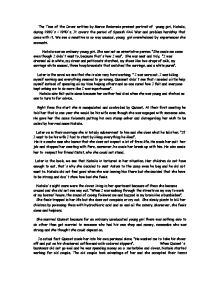 Time of the Doves

The Time of the Doves written by Merce Rodoreda present portrait of young girl, Natalia, during 1930�s - 1940�s. It covers the period of Spanish Civil War and problem hardship that come with it. We see a sensitive in no way unusual, young girl overwhelmed by experiences she accounts. Natalia was an ordinary young girl. She was not an assertative person. "She made me come even though I didn�t want to, because that�s how I was". She was neat and tidy. "I was dressed all in white, my dress and petticoats starched, my shoes like two drops of milk, my earrings white enamel, three hoop bracelets that matched the earrings, and a white purse". Later in the novel we see that she is also very hard-working. " I was worn out. I was killing myself working and everything seemed to go wrong. Quimnet didn�t see that i needed a litle help myself instead of spending all my time helping others and no one cared how I felt and everyone kept asking me to do more like I was superhuman". ...read more.

He also made her to respect his friend Cintet, who she could not stand. Later in the book, we see that Natalia is tortured in her situation. Her children do not have enough to eat, that�s why she decided to sent Antoni to the camp even he beg and he did not want to. Natalia did not feel good when she was leaving him there but she decided that she have to be strong and don�t show how bad she feels. Natalia�s night mare were the doves living in her apartment because of them she became crazed and she did not see way out. "When I was walking through the streets on my way to work at my bosses�house, the sound of cooing followed me and buzzed in my brain like a bumblebee". She feels trapped in her life but she does not complain or cry out. She slowly plants to kill her children by poisoning them with hydrochloric acid and so end all the misery. ...read more.

So she decided to get of them in a secret way by upseting them. Finally, she ends up marrying antoni. Again, we see here that she just falls into the situation, Antoni is well off and he is kind to her. She feels, she has no other way out. However, she has to accept the fact that he is impotant. With Antoni she had a maid, new clothes, furniture, love and respect that she did not have with Quimet. At the end of the novel she is happy with her life. One might expect something different from a typical Spanish women in 1930�s. A typical Spanish women would be in control of her household and would have a mind of her own. She would have to obey her husband to a certain extant but she would be the one to run the household and would be a lot more outspoken if she disagrred with her husban about thigs. Natalia on the other hand was very passive and reacted to everything with quiet resignation. Natalia kept a lot of pain deep down inside her. ...read more.