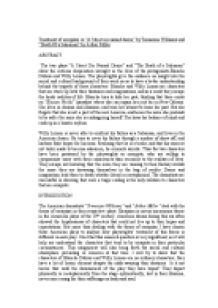 ﻿Treatment of escapism in ?A Street car named desire? by Tennessee Williams and ?Death Of a Salesman? by Arthur Miller ABSTRACT The two plays ?A Street Car Named Desire? and ?The Death of a Salesman? show the extreme desperation wrought in the lives of the protagonists-Blanche Dubois and Willy Loman. The playwrights give the audience an insight into the social and cultural background of their work so as to have a better understanding behind the tragedy of these characters. Blanche and Willy Loman are characters that are stuck up with their fantasies and imaginations, and as a result they escape the harsh realities of life. Blanche tries to hide her past, thinking that there exists an ?Elysian Fields? (paradise where she can regain her joy) her in New Orleans. She lives in dreams and illusions, and tries her utmost to erase her past. But she forgets that she is not a part of the new America, and hence the more she pretends to be safer the more she is endangering herself. She loses her balance of mind and ends up in a lunatic asylum. Willy Loman is never able to confront his failure as a Salesman, and lives in the American dream. He tries to cover his failure through a number of show off, and harbors false hopes for his sons. Realizing that he is a broke, and that his sons are not tailor made to become salesmen, he commits suicide. Thus the two characters have been portrayed by the playwrights as escapists, who are willing to compromise more with their consciences than reconcile to the realities of lives. They escape not knowing that the more they are running to their fantasy worlds the more they are drowning themselves in the bog of reality. Desire and imagination lead them to death whether literal or metaphorical. The dramatists are successful in showing that such a tragic ending is the only solution to characters that are escapists. ...read more.

Again the diamonds found by Ben in the jungle are a symbol of success for Willy. Although a complete failure, Willy still sees the hopes in the diamonds and plans to ?fetch a diamond17? for Biff by committing suicide. He is not aware of the fact the insurance company may forfeit his claim on the insurance money in the event of discovering that his death was a suicide. But he is preoccupied with his imagination and says, ?I see it like a diamond, shining in the dark, hard and rough, that I can pick up and touch in my hand18?. The settings of Brooklyn resemble a forest of concrete highly populated by people from all walks of life. Willy?s apartment lies in a congested place where there is no sunshine. But lost in his illusions he hankers for a garden in order to create a better and healthy life for his family. He is utterly disappointed ?The grass don't grow anymore, you can't raise a carrot in the back yard19.? Miller uses the garden as a motif, and Willy tries his utmost to sow the seeds in the garden of his imagination, never for a moment realizing that there is not a blade of grass in the concrete of Brooklyn Willy is taken on a flight of his imagination toward his past whenever he sees Linda mending her stockings. The stocking reminds him of his sexual liaison with a woman, and of his happy times when he could afford to give stockings to his mistress. Willy is surrounded by other symbols that remind him of his status, and also the fact that how much engrossed he had become in acquiring the American Dream. He has all the brands in his house, ?Chevrolet, Simonize, Hastings, Studebaker20.? The name of the Chevvy makes his heart swell with pride, as it is ?the greatest car ever built21? Equating the brands with success is a folly not only of the salesman but also of a common man. ...read more.

It is a play where there is no transition. Miller says, ?There is a direct thrust of the story from the first minute, each scene is cut at its earliest moment, and succeeding scenes begin at the latest possible moment.36? The way Miller writes and directs the scenes helps the audience understand the delusions and memories of the protagonist Willy in a more sympathetic manner. Blanche is an individual who suffers on account of the social influences on households; Willy is a universal man, who represents everyman and dreams of success and fame. Blanche symbolizes the disappearance of Old America while Willy symbolizes the disappearance of American Dream. Blanche meets with her tragic ending as she is at war with a patriarchal society represented by Stanley, a symbol of New America, but Willy is at war with himself. There is no antagonist in ?Death of a Salesman?; hence it is the inner conflict that leads Willy to such desperation. In the Aristotelian canons of tragedy, it is Tennessee who reaches the mark closely, as besides the tragic flaw of Blanche the audience sees Stanley as the personification of evil. The plays are realistic in nature but with a degree of variation which helps the dramatists to mold their characters as perfect escapists. If Tennessee calls his work ?a tragedy with the classic aim of producing a catharsis of pity and terror37", Miller calls his work as ?a tragedy of the common man.? They are escapists, no doubt, but they are tragic heroes in that they do not lose hopes until the very end. For Blanche, there is Shep Huntleigh while for Willy there is a hope ?Ben, that funeral will be massive! They'll come from Maine, Massachusetts, Vermont, New Hampshire38!? Having realized that they are not part of the Darwinian society of America, Blanche and Willy escape to their dream worlds in their fantasies, leaving the readers sympathize with the root cause of their sufferings-the American socio, cultural and political conditions after World war II. ...read more.